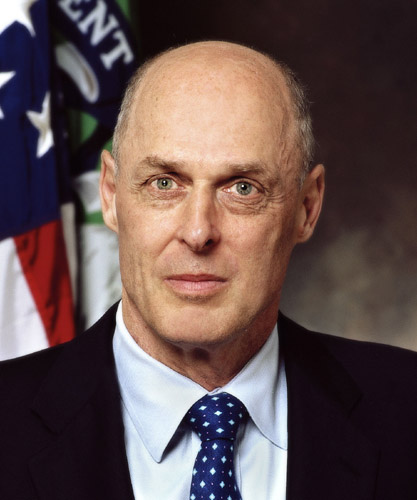 Could Hank Paulson, the bald-headed, hard-charging former Treasury secretary who crafted the ad hoc bailouts of 2008, return to his former perch at under-fire Goldman Sachs? In a “what-if” story in today’s Wall Street Journal, Paulson’s name is floated as a potential successor to the chairmanship at Goldman, should current chair and CEO Lloyd Blankfein resign or be forced out of the chairman’s role amidst one of the darkest periods in the Goldman’s history.

To no one’s surprise, rumors are swirling inside and outside of Goldman Sachs over the fate of the investment bank’s leader, Blankfein—whether he’ll survive the onslaught of lawsuits, the bad PR, a dip in the firm’s stock, and so on. Right now, there aren’t any indications that Blankfein or other top brass at Goldman are set to leave. There is, however, a resolution filed by a Goldman shareholder demanding a split of the CEO and chairman positions, both of which Blankfein currently occupies. If the resolution passed, Blankfein would have to relinquish the chairmanship. One bloc of speculators inside Goldman wants Paulson to return to the firm to fill the chairman role if Blankfein is pushed out.

Whether Paulson would jump at such a move is unlikely. After all, if his memoirs are any indication, Paulson sees himself as the man who helped rescue (most of) Wall Street’s most storied firms and the financial markets, emerging relatively unscathed from the meltdown of 2008. A return to Goldman would likely tarnish that narrative. It would also provide more fodder for those who call Goldman “Government Sachs,” and rail against the revolving door between Washington and Wall Street.

All of this, of course, hinges on the civil suit filed by the Securities and Exchange Commission against Goldman. The SEC alleges that the firm sold a complicated financial product to investors the design of which had been heavily influenced by a hedge fund trader, John Paulson, who was betting against that product; in other words, the product was designed to fail. What’s more, the SEC says Goldman failed to fully disclose to investors Paulson’s role in influencing the product’s design. Right now, the case is still pending, and while there have been rumors of a settlement, Goldman has publicly said it will fight the suit. How the SEC-Goldman battle plays out will largely determine the fate of Blankfein and whether Paulson comes into the picture at all.