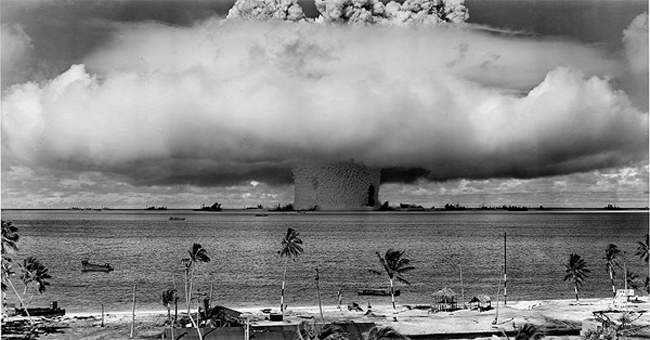 Between the on-scene reporting of Mac McClelland, the political and environmental coverage of Kate Sheppard, and the scientific curiosity of Kevin Drum, I figured Mother Jones pretty much had every angle of the BP/Deepwater Horizon oil spill covered. But it turns out there’s a groundswell of support in the blogosphere for a radical solution to stop the spill: Drop a big ol’ nuclear bomb on the mutha.

Sound nuts? That’s what I thought, too, until I learned that the Russians have already done this a bunch of times—and that the US already has a bunch of bomb-savvy scientists brainstorming solutions in the Gulf. Even weirder, though, is the support that some people are extending to the un-ironically-titled “nuclear option.”

Let’s start with the Russians. According to Vladimir Lagovsky of Komsomolskaya Pravda (once a Soviet communist paper), “In the USSR, a few such leaks were plugged with the help of the peaceful atom.” Five leaks, all underground, were plugged thusly, the paper says—starting with a 1966 natural gas fissure in Uzbekistan. That one was snuffed using a 30-megatonkiloton blast six kilometers deep—about one and a half times the size of the Hiroshima bomb. “The idea of the method is simple,” Lagovsky writes. “An underground explosion pushes the rock, compresses it, and actually squeezes the channel well shut.”

Sure enough, Russia Today even has a video of one natural gas leak and the subterranean blast that quelled it:

Yeah, but still. Nuts. I know. Except maybe it’s already been discussed by people…top people. The Telegraph of London reported on May 14 that the Obama administration had sent a team of nuclear physicists, led by Energy Secretary Stephen Chu, to the Gulf to consult on solutions to the leak. Also on that team: “82-year-old Richard Garwin, who designed the first hydrogen bomb.”

Speaking of conspiracy theorists, there’s a weird mix of support out there for this atom-smashing stratagem. Christopher Brownfield, a former Navy submarine officer with a new book to sell (Full disclosure: He was in the class behind me at the US Naval Academy), told Shepard Smith of Fox News that dropping a bomb in the Gulf to “nuke the well shut” isn’t the craziest idea in the world. Brownfield’s a bright guy, and he’s no right-wing nut; in fact, he’s written impassioned posts on Daily Beast explaining why socialized medicine works for the military and why he couldn’t vote for his hero, John McCain, for president. (I sympathize; it’s totally a Bancroft Hall thing.)

But rest assured, not all proponents of the Mexican Mud Meltdown are stable college graduates. Take, for instance, this thread on FreeRepublic.com, wherein steve0 and HiTech RedNeck try to convert the masses to their aim: “Nuke the BP oil spill & environazis that get in the way, too much at stake.” They meet no small amount of resistance, which prompts steve0 to reply sardonically:

This should not be attempted.

It will be a catastrophic miscalculation.

For one thing, it will release Godzilla.

And for another, it won’t kill enough hippies.

What are you talking about, steve0? You’re killing me already.

[If you appreciate our BP coverage, please consider making a tax-deductible donation.]