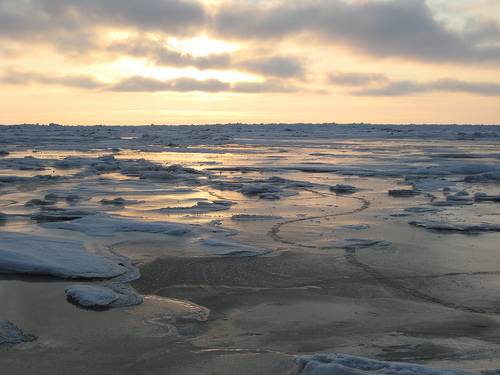 The Obama administration put the brakes on drilling expansion last week as the true scope of disaster in the Gulf of Mexico was becoming clear. And on Thursday, the Department of Interior called off plans to lease areas off the coast of Virginia to new oil and gas production. But unless the administration intervenes in the coming weeks, drilling could start in new tracts of the Arctic as soon as July.

A coalition of 15 conservation groups and Alaska Native communities this week urged Interior Secretary Ken Salazar to reconsider approval he issued in late 2009 for Royal Dutch Shell to begin exploration in the Chukchi and Beaufort seas off the northern coast of Alaska. The groups say that these areas would be particularly vulnerable should a spill occur, and that the Department of Interior’s Minerals Management Service did an inadequate job of evaluating the potential environmental threats posed by drilling in these seas.

“MMS did not analyze or disclose the effects of a large oil spill from Shell’s activities before approving the plans, even though it acknowledges that such a spill could have devastating consequences and could be difficult to clean up in the Arctic Ocean’s icy waters,” wrote the groups, which include the Alaska Wilderness League, Greenpeace, Earthjustice, and the village of Point Hope.

They may have good reason to be concerned. In the MMS evaluation of the Chukchi application issued last December, the agency concluded that a large spill was “too remote and speculative an occurrence to be considered a reasonably foreseeable occurrence.” The MMS evaluation also states that “since 1971, no large crude or condensate spills have occurred from well-control incidents while drilling approximately 14,000 [outer continental shelf] exploration wells.” Clearly, the situation in the Gulf upends that.

Documents released this week make it clear that MMS failed to conduct adequate environmental analysis on the Deepwater Horizon lease application last year, taking at face value BP’s claims that there was little threat posed by a spill from the operations. And a Government Accountability Office report released last month found that the Alaska regional office of MMS in particular had failed to conduct adequate environmental analysis of drilling operations at the behest of the oil and gas industries. The GAO report notes that MMS “faces challenges in the Alaska OCS Region in carrying out its responsibilities” under the National Environmental Policy Act. And as I reported earlier this week, MMS has been plagued by a number of scandals and lapses in regulatory oversight in recent years.

“It’s Salazar’s job to make sure the oil companies aren’t polluting our oceans, and he hasn’t been doing that,” said Rebecca Noblin, director of the Alaska office of the Center for Biological Diversity, another group signing on to the letter.

Groups opposing the Alaska drilling say that an accident there would be far more catastrophic than in the Gulf. The area freezes over for six months out of the year, which would make clean up impossible. The seas are treacherous, with heavy winds and frequent storms, and it’s dark much of the year. “If there’s a disaster in the Arctic, it could be even more significant than what we’re seeing in the Gulf because the ability to respond to an oil spill is almost nonexistent,” said Tom Dillon, senior vice president for field programs at the World Wildlife Fund. “It’s a recipe for disaster.”

In Obama’s plans to expand drilling in March, he left Bristol Bay, an environmentally sensitive area of the Bering Sea in southwest Alaska, off limits for drilling. The administration also committed to keeping new areas of the Chukchi and Beaufort out of leasing plans, but decided to let the existing leases in the region stand. Under leasing plans put in place by the George W. Bush administration, Shell bought the rights to develop tracts of land in both seas, where the company plans to start exploration in July; Statoil and ConocoPhillips also own leases in the region, but don’t have plans to explore them currently.

MMS granted approval for Shell’s Beaufort exploration in October 2009 and for Chukchi in December 2009, though both are conditioned on meeting final approval. Department of Interior deputy press secretary Julie Rodriguez said in a statement Thursday that additional review is scheduled to be completed by May 28, and that the review “will help guide the Department’s decisions” on whether to give final approval to Shell’s applications. A later statement on Thursday from DOI indicated that MMS Director Liz Birnbaum has sent a letter to Shell president Marvin Odum “confirming that MMS will not make a final decision on the requested permits for the drilling of exploration wells in the Chukchi and Beaufort Seas until the Department of the Interior’s report to the President has been submitted and evaluated.”

There are also a number of lawsuits from environmental and Native groups challenging the development. The 9th U.S. Circuit Court of Appeals in Portland, Ore. heard oral argument today in a challenge from Earthjustice, the Center for Biological Diversity, and other groups, which allege that MMS did not conduct adequate environmental reviews. A similar challenge is underway in the federal district court in Anchorage. Groups this week also filed an appeal challenging the Clean Air Act permit that the Environmental Protection Agency issued for drilling operations. And on Wednesday, the Center for Biological Diversity gave notice to the Department of Interior that it intends to file a suit alleging that the agency did not conduct adequate review under the Endangered Species Act.

Drilling opponents are hoping that the Deepwater Horizon accident will serve as a wake-up call to the administration on the risks that could stem from drilling in the Arctic. “The Gulf situation I think is a game changer,” said Peter Van Tuyn, an Anchorage attorney who has represented plaintiff groups in challenges to the Arctic development for years. “It’s riskier to drill here than in the Gulf, and we know ahead of time we can’t clean it up.”