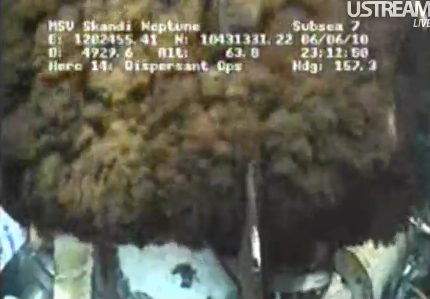 As of Sunday evening, BP was reporting more success with the latest method of containing the well that has now been gushing oil into the Gulf of Mexico for 48 days. The company says its new dome is diverting 10,500 barrels of oil to a tanker above. But the number again raises the still unanswered question of just how much is actually coming out of that well.

A new containment dome was successfully lowered over the site last Thursday. There are four vents in this dome, and the company has been closing them very slowly, for fear that too much pressure may build up in the cap or that it could cause the formation of icy hydrates that caused a previous capping effort to fail. They’ve only closed one vent so far, which means quite a bit of oil is still gushing into the Gulf, as you can see vividly on the live video feed.

The high figure that they’ve reported capturing would indicate that the larger estimates of how much oil is coming out of the well may be correct. Up until May 27, both BP and the federal government maintained that the release was just 5,000 barrels per day. The team of experts assembled by the federal government then offered an estimate of 12,000 to 19,000 barrels per day. But a closer inspection of the government’s actual report reveals that the figure is probably closer to the high-end estimate offered by the team studying video of the release site, which estimated that as much as 25,000 barrels has gushed from this well every day for almost seven weeks now. It could be even higher now; before placing the new dome last week, the riser from the well had to be cut off, which may have increased the flow by as much as 20 percent.

The improved capture rate from the well is a positive sign, but the cap is not expected to siphon all of the oil even if or when they get it operating at full capacity. And there are already worries about the capacity to collect the oil at the surface; the boat holding the oil now only has the capacity for 15,000 barrels a day.

Meanwhile, BP CEO Tony Hayward is still pedaling specious claims about the spill, saying Sunday that the cap is siphoning “probably the vast majority” of the oil. We’ve known for quite a while now that BP has a problem with math. The live video indicates the company is still not being upfront about the true extent of the disaster.

In response to Hayward’s most recent comment, Rep. Ed Markey (D-Mass.) send the company a letter requesting some clarity on just how much oil it actually thinks is coming out of the well at this point. Markey also asked what the company intends to do with all this oil, a separate but equally important question that I’ll visit in a future post.

So the question remains: When will BP be honest about just how much oil they’re responsible for releasing into the Gulf?