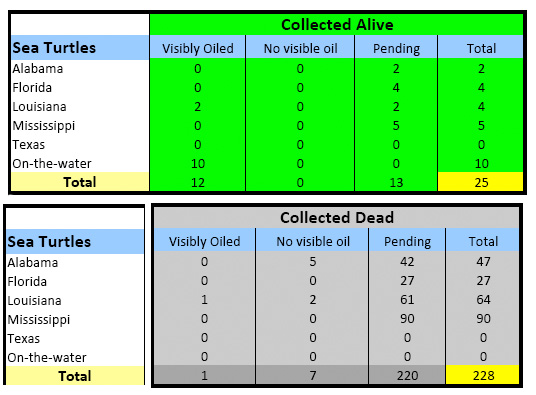 As reporter Kate Sheppard blogged earlier, the growing, unphotographable wildlife death toll from the BP spill is incredible: 444 dead birds, 222 dead sea turtles, and 24 mammals (including dolphins). Some of the oil-slicked critters were already endangered, like this baby Kemp’s Ridley sea turtle. Right now is nesting season for the endangered turtles, and they must swim through the Gulf of Mexico to get to their Mexican breeding grounds. But the Kemp’s Ridley isn’t the only endangered creature battling sticky oil: brown pelicans, who flew of the Endangered Species List in November, have nests and newborn hatchlings in the spill zone. Our reporter Julia Whitty has pics here.

Wildlife tolls can only be expected to climb, especially as endangered manatees continue migrating to the Gulf’s warm waters. One manatee in particular, named “Bama,” is worrying wildlife biologists as she makes her way back to the Gulf. Bama’s tagged, so biologists can watch her movements and her proximity to the spill zone. “We know that she’s not the only animal out there… But we think it’s very likely that she’s just reflective of other animals that are also making the same regular seasonal migration,” Dr. Carmichael of the Alabama Dauphin Island Sea Lab told a Florida news station. Aside from manatees, the Gulf is home to dozens of threatened or endangered species, from the gulf sturgeon to the wood stork, not to mention plants and insects. Some of these animals live nearly exclusively in wildlife preserves, but that won’t keep the oil out: there are 34 national wildlife refuges at risk from spill-related pollution, according to the Department of Fish and Wildlife.

Another reason the wildlife toll can be expected to rise, perhaps meteorically, is the “pending” animals listed in the daily wildlife collection report from federal authorities. The report catalogs all animals collected, if they were alive or dead, and whether oil was present. (Though as Kate Sheppard rightly points out, many dead animals inevitably sink to the Gulf’s floor, leaving them out of this count.) The data at first glance looks solid, but one should use a critical eye when looking at this information. As pictured above*, note the number of sea turtles: 1 was found dead and “visibly oiled,” 7 were found alive and not oiled, but there were 220 dead turtles whose oil status were undetermined. As of June 2 (the most recent report available) there were also 119 dead birds and 28 dead mammals waiting to be classified.

Dead wildlife is only part of the spill’s cost to the Gulf’s ecosystem, so the Defenders of Wildlife, the Center for Biological Diversity, and other environmental groups have filed “intent to sue” notices for varied spill-related violations, from use of lethal dispersants to unauthorized “takes” of endangered animals. Lawsuits are all very well, especially when they produce fines that can be put toward conservation efforts, but for many animals, like the “dolphins swimming through thick gunky oil” and dead jellyfish washing up on shore, the price has already been paid.

*format of this graphic has been altered slightly for fit in space provided, but all information remains the same.