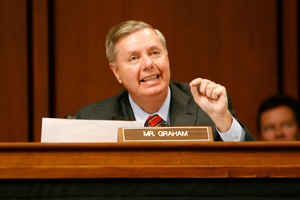 On Tuesday, South Carolina Republican Lindsey Graham told reporters that he would vote against the climate bill he helped author. Now he’s going one step further. Graham, one of the few Republicans who claimed to care about climate change, now says global warming is no big deal.

Graham appeared on Wednesday at a press conference with Dick Lugar (R-Ind.), who was rolling out his own energy bill, a measure that relies heavily on expanding nuclear power and raising fuel economy standards without putting a cap on carbon dioxide emissions. Yesterday, Graham said he didn’t think any energy bill could get 60 votes this year because oil drilling has become too controversial. Today he decided, at the last minute, to back Lugar’s bill.

Reporters asked Graham several times about why he was supporting Lugar’s bill, when just a few months ago he had argued that the Senate shouldn’t pass a “half-assed” bill that lacked hard restrictions on carbon emissions. Graham replied that he now doesn’t think pricing carbon is that important. “The science about global warming has changed,” he noted, offhandedly. “I think they’ve oversold this stuff, quite frankly. I think they’ve been alarmist and the science is in question,” Graham told reporters. “The whole movement has taken a giant step backward.”

I followed up with him. “Can you clarify that statement that the science on global warming has changed?” I asked.

“The public acceptance about global warming has changed,” he said.

“Well, what do you think?” I replied.

I’ll print his response in full, because it’s a humdinger:

It makes sense to me that the planet is heating up because you can measure heat. It’s not a stretch to say that what goes into the air is contributing to global warming, but I don’t want to be in the camp that says I know people in Northern Virginia will never see snow. At the end of the day, I think carbon pollution is worthy of being controlled, whether you believe in global warming or not. I do believe that all the CO2 gases, greenhouse gases from cars, trucks, and utility plants is not making us a healthier place, is not making our society better, and it’s coming at the expense of our national security and our economic prosperity. So put me in the camp that it’s worthy to clean up the air and make money doing so. This idea that carbon’s good for you. I want that debate. There’s a wing of our party who thinks carbon pollution is okay. I’m not in that wing.

I asked him, if carbon emissions aren’t warming the planet, why are they bad? Here’s his reply:

I just think it’s bad … the reason I don’t hang out in traffic jams and get out and suck up the wind is I think this crap is bad for you. We’ve had an increase in asthma cases. If you’ve ever been to Thailand stuck behind 400 motorcycles, it’s a lousy place to be. It doesn’t take a rocket scientist in my view to understand that the stuff floating in the Gulf, if you burn it doesn’t make it better for you. If you wouldn’t go swimming in this stuff, why would you burn it and want to breath it?

Graham ended his commentary on the subject on this note: “I do believe the environmental benefit of a low carbon economy is worth the Republican party’s time and attention. Does climate change have to be your religion? No, it is not my religion, it is my concern.”

This is quite different from what Graham has been saying for the past eight months. Last October, he co-authored an op-ed with John Kerry (D-Mass.) arguing that that “climate change is real and threatens our economy and national security.” Now he’s fumbling to figure out how to make it seem like he still cares—but not too much.