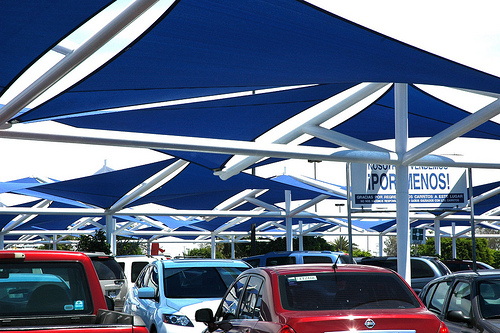 [UPDATE]: The Senate today accepted the House’s exemption for car dealers from oversight by a new Consumer Financial Protection Bureau. The two leaders of the House-Senate conference process—Rep. Barney Frank (D-Mass.) and Sen. Chris Dodd (D-Conn.)—opposed the exemption, but acceded to colleagues who had pushed hard for the exemption.

Of all the special interest groups swarming Washington’s financial reform debate, you could argue that the award for Most Pesky belongs to the auto dealer lobby. For the past year, auto dealers and their water-carriers on Capitol Hill have vehemently opposed new oversight and regulation under the proposed Consumer Financial Protection Bureau, whose jurisdiction would include mortgage brokers, payday lenders, and other businesses that lend money to consumers. Auto dealers make up 80 percent of the nation’s automotive loans. Nevertheless, in the House’s reform bill, they succeeded in winning an exemption from the bureau’s oversight. (The Senate did not exempt them.) Now, in the latest announcement by top House members trying to reconcile the House and Senate’s respective bills, the House is offering an amendment that would ensure dealers are exempt from oversight in the final bill.

If any type of retailer and/or lender cries out for new oversight, it’s auto dealers. In 2009, dealer-related complaints ranked fourth-highest among all types of consumer-based complaints, at 26,019, after cell phone service companies, TV companies, and—big surprise—banks. The Center for Responsible Lending has reported that dealers frequently peddle higher interest rates to customers than would a regular bank, and that these “markups” amount to an extra $20 billion a year for consumers.

Throughout the past year’s reform fight, groups ranging from the Navy Marine Corps Relief Society and the National Consumer Law Center have pushed hard to include dealers in any new consumer bureau’s purview. (The military is especially active on dealer regulation because, as Mother Jones‘ Stephanie Mencimer has reported, shady dealers often prey on vulnerable servicemen and -women.) In a May letter to Sen. Sam Brownback (R-Kan.), who had sought an exemption for dealers in the Senate’s bill, military and consumer advocacy groups wrote:

For example, some car dealers engage in “powerbooking,” a scam in which the victim does not have access to the documents the dealer submits to the finance company and therefore has no knowledge of the phantom add-ons the auto dealer claims are part of the vehicle. Some dealers falsify loan applications, in which case the victim does not have access to the loan documents that falsifies pay stubs and statements of income. In another scam, the auto dealer promises to pay off the lien on the victim’s trade-in at the time of sale, but does not, so the consumer is unknowingly left with the responsibility to pay off the new car as well as the car that was traded in. There is no way for the victim to know in advance that the dealer doesn’t intend to pay off the lien. Senator Brownback’s modified amendment would do nothing to stop these abuses.

The House and Senate’s new consumer protection bureau was created, lawmakers have said, to reign practices like powerbooking and auto lien fraud. Even President Obama has personally stepped in to fend off an auto-dealer exemption, saying in May, “The fact is, auto dealer-lenders make nearly 80 percent of the automobile loans in our country, and these lenders should be subject to the same standards as any local or community bank that provides loans.” The House conferees, who meet again this week to hash out differences in their reform bill, apparently don’t agree.