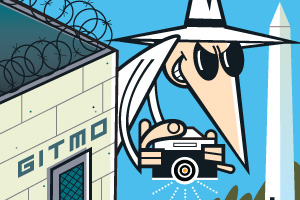 The CIA probably doesn’t want you to know this, but unmasking its covert operatives isn’t as hard as you’d think. Just ask John Sifton. During a six-year stint at Human Rights Watch, the attorney and investigator was hot on the trail of the CIA and some of its most sensitive Bush-era counterterrorism programs, including extraordinary rendition, secret Eastern European detention sites, and the legally dubious and brutal methods used to extract information from detainees. “Even deep-cover CIA officers are real people, with mortgages and credit reports,” Sifton once told CQ Politics. For researchers with a trained eye for the hallmarks of a CIA alias, there are obvious giveaways: “A brand new Social Security number, a single P.O. box in Reston, Virginia. You disregard those and focus on the real persons who lie behind, and you can find them.”

Sifton’s talent for uncovering the CIA’s secrets may have served him well—but now, it also has set off a firestorm in the human rights community, prompted a backlash from congressional Republicans, and helped trigger a federal investigation headed by none other than Patrick Fitzgerald, the special prosecutor in the Valerie Plame affair. The story begins in 2008, when military prosecutors sought the death penalty in military commission trials of six suspected 9/11 conspirators being held at Guantanamo Bay, including Khalid Sheikh Mohammed, the alleged mastermind of the attacks. The defense had few resources and little experience trying capital cases. Into the breach stepped the American Civil Liberties Union and the National Association of Criminal Defense Lawyers, which created the John Adams Project—an effort to supply civilian lawyers to assist in the defense of some of the least sympathetic clients in the world. Fittingly, the group was named after the founding father who had represented British soldiers after the Boston Massacre.

A top priority for the lawyers was establishing whether the detainees had been coerced or tortured into giving the statements the government was now using against them. And to do that, the detainees’ lawyers needed to identify who had been involved with those interrogations.

To get that information, the John Adams Project turned to Sifton, who in 2007 had opened his own investigations firm, One World Research, catering largely to human rights and public interest groups. Its website says the firm’s employees can “deploy quickly to almost anywhere in the world; for instance, to take affidavits in Afghanistan, investigate allegations of abuses by private security forces in Nigeria, examine incidences of questionable police practices in the United States, or conduct studies of social or economic rights issues in Nepal.” For its clients—which have included Amnesty International, Human Rights First, and the ACLU—it offers services from public-records searches to locating victims and witnesses, from serving subpoenas to “collecting video, photographic, and physical evidence.” One World also says it can provide “surveillance,” which is fairly routine for a PI shop—except when your quarry happens to be CIA officers.

The role of Sifton’s firm in gathering information for the John Adams Project has not previously been revealed. But last August, the Washington Post reported that the Justice Department had launched an investigation after Gitmo defense lawyers allegedly showed their clients pictures of CIA personnel. At the time, Anthony Romero, the ACLU’s executive director, insisted no laws or regulations had been broken. “The real scandal,” he said in a statement, “isn’t that we’re investigating the torture of our clients, but that the government isn’t.”

Photos depicting CIA officers also reportedly surfaced in the Guantanamo cell of accused 9/11 financier Mustafa Ahmed al-Hawsawi. Coming at a time when CIA personnel had grown uneasy over the Obama administration’s scrutiny of Bush-era war-on-terror tactics, the discovery of the photos only escalated the tension. John Rizzo, who retired in December as the agency’s acting general counsel, has described the incident as “far more serious than Valerie Plame.” Another former high-ranking intelligence official explains, “This is an agency that has reasons to be concerned as to whether or not somebody’s got their back. It’s always operating out there on the edge, not unlawfully, but generally at the farthest reaches of executive prerogative.”

With the CIA pressing the Justice Department to act, Attorney General Eric Holder added Fitzgerald to the investigation. It was a painful blow: Some human rights activists had hoped the administration would appoint Fitzgerald to run a wide-ranging investigation of the Bush-era torture practices. Instead, he’d been chosen to investigate the torture critics.

At Human Rights Watch, the initial instinct was to publicly defend the John Adams Project against the suggestion that it had done anything improper. But the organization decided against going on the attack, says Stacy Sullivan, the group’s counterterrorism advisor, largely because the ACLU and John Adams lawyers refused to discuss exactly what had transpired.

Those acquainted with the operation have reason to keep quiet. “Anybody who says anything—’Oh yeah, I knew about this before’—they’re going to get a grand jury subpoena,” notes Michael Ratner, president of the Center for Constitutional Rights. (He confirms his organization has employed Sifton’s firm, but “can’t say why.”)

But sources familiar with the operation say the goal of One World Research’s surveillance effort was to allow defense lawyers to provide photo lineups (containing random people as well as CIA personnel) to their clients so they could pick out officers who had interrogated them, enabling lawyers to call the interrogators as witnesses.

“Proving torture is crucial to the defense,” says Joanne Mariner, the director of Human Rights Watch’s terrorism and counterterrorism program. “The way to prove it ideally would be to get the torturers in the courtroom.” Sifton’s firm would figure out the real names of the suspected interrogators, then look for photos of them online. For a few, no pictures could be found, so One World Research set out to track the officers down and take pictures.

The notion of showing photos of CIA officials to suspected terrorists has provoked outrage from congressional Republicans. Last month, Rep. Jeff Miller (R-Fla.) slipped a provision into a military appropriations bill that was clearly aimed at the John Adams Project lawyers. It requires the Pentagon’s Inspector General to launch an investigation into Gitmo defense lawyers who may have “interfered with operations of the Department of Defense.” (The measure survived the mark-up process by the House Armed Services Committee.) Miller, who describes the John Adams Project as a “treacherous enterprise,” has said that he believes defense lawyers’ actions created a “significant security risk to intelligence and military personnel,” “compromised national security,” and violated “US laws and Department of Defense policies.”

It remains unclear whether, by giving detainees what sources describe as photo montages containing pictures (but not names) of CIA officers, the John Adams lawyers breached any disclosure rules. If a violation occurred, say former military lawyers at Guantanamo, it’s likely because in the alternate justice system created by the Bush administration, it was difficult to tell what was and wasn’t allowable. “I had a full time job just…fighting to verify what the rules were,” says Col. Steve David, the first chief defense counsel at Gitmo, who recalls once being informed that every word uttered by a high-value detainee was considered a state secret.

“The only way really for a detainee to bolster his claim of torture,” says Lt. Colonel Darrel Vandeveld, a former top military prosecutor at Guantanamo who resigned because of concerns with the commissions system in late 2008, “is to identify faces, names, pseudonyms, places, and so on, that lend credibility to the claims of mistreatment.” And that, he says, pretty much means using a photo lineup—even though, he admits, “If I were a CIA officer, I would be highly concerned that my image was shown to a detainee.”

David worries that the investigation into the photos will weaken the legal representation afforded to detainees in an already lopsided system. “Can you imagine the chilling effect?” he asks. “We want you to defend them, but not to do that zealously?”

Some in the human rights community have privately questioned the John Adams Project’s tactics, if for no other reason than the PR blowback. But most agree that it was the Kafkaesque military commissions process that drove the group to such desperate measures. Says Karen Greenberg, the executive director of New York University’s Center on Law and Security, “The reason people do things like this is they feel all the legitimate tools were taken out of their hands.”