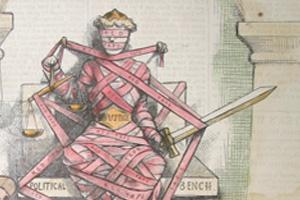 A federal judge in New Orleans on Tuesday sided with the oil industry, striking down the temporary moratorium on new offshore exploration and deepwater drilling the Obama administration imposed last month. That judge, it turns out, has in recent years had interests in Transocean—the world’s largest offshore drilling company and the owner of the Deepwater Horizon rig—as well as other energy companies engaged in offshore oil extraction.

According to the most recently available financial disclosure form for US District Court Judge Martin Feldman, he had holdings of up to $15,000 in Transocean in 2008. He has also recently owned stock in offshore drilling or oilfield service providers Halliburton, Prospect Energy, Hercules Offshore, Parker Drilling Co., and ATP Oil & Gas. Feldman was appointed by President Ronald Reagan in 1983.

Obama’s six-month moratorium put the brakes on the approval of new permits for deepwater drilling and suspended work at 33 exploratory wells in the Gulf and Pacific. A group of oil and gas companies, with the support of the state of Louisiana, asked the court to throw out the moratorium so they can continue drilling. Feldman heard two hours of arguments Monday on whether to grant an injunction to lift the moratorium before rendering his decision today. Describing the moratorium as “arbitrary and capricous,” Feldman wrote in his opinion: “If some drilling equipment parts are flawed, is it rational to say all are? Are all airplanes a danger because one was? All oil tankers like Exxon Valdez? All trains? All mines? That sort of thinking seems heavy-handed, and rather overbearing.”

While not party to the lawsuit, Transocean has been highly critical of the moratorium. Speaking at an industry conference in London on Tuesday, CEO Steven Newman called the moratorium “arbitrary.”

Feldman’s most recent financial disclosures are not yet available online, so it remains unclear whether he still has holdings in Transocean and a host of other firms with a stake in the verdict he rendered on Tuesday. If he does, that raises the question of whether he should have been barred from hearing the case because of his financial interests. But in Louisiana it’s hard to find a judge without ties to the industry. In the Gulf region, 37 of 64 federal judges have some ties to the oil sector.