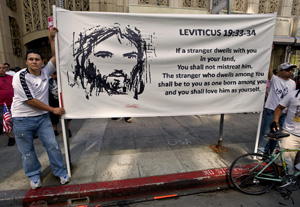 When some of the nation’s top evangelical leaders threw their weight behind immigration reform, liberal advocates were pleased to receive help from an unexpected ally. But immigration foes saw it as nothing less than treachery.

Last month, the National Association of Evangelicals and Richard Land, head of the Southern Baptist Convention’s (SBC) Ethics & Religious Liberty Commission, launched an ad campaign to kick off a new lobbying campaign for immigration reform that includes a pathway to legalization for illegal immigrants. The Center for Immigration Studies, a conservative anti-immigration group, blasted the effort. “The more left-leaning clergy ignored the Apostle Paul’s warning and exchanged the truth of God for a lie,” the group said. “In some ways, the lie these evangelicals have traded for is more treacherous because for many of them it appears to wrap a cursory understanding of immigration policy in moralistic, well-intentioned error.”  And this growing clash between evangelical groups and anti-immigration activists threatens to split the conservative coalition.

Land is one of the country’s most powerful evangelical leaders and the SBC has been a frequent ally of the Republican Party. And in the wake of Arizona’s tough immigration law, he’s been joined by other high-profile religious conservatives, who have issued a call for “Christian compassion” for illegal immigrants. They include Mat Staver, dean of the law school at Jerry Falwell’s Liberty University—who has only recently come forward to support immigration reform—and prominent Latino evangelical Rev. Samuel Rodriguez, who’s been dubbed the “Hispanic Karl Rove.” All regularly cite passages recalling the Biblical exodus in Egypt. “We once were strangers and foreigners in a foreign land,” said Rev. Marcos Witt, a Houston-based preacher who leads of the largest evangelical churches in the country. “Stop the raids and welcome people.”

Land’s group also backed comprehensive reform in 2006—at a time when many conservative Christian groups sat out the debate or actively opposed the effort. But following the passage of Arizona’s law, Land has sharpened his rhetoric and stepped up the SBC’s lobbying efforts, calling for an overhaul of the entire immigration system. “The federal government needs to step up to the plate. If not, it’s going to rend the fabric of our society,” Land said in a conference call last month organized by Conservatives for Comprehensive Immigration Reform. More strikingly, Land slammed anti-immigration foes on the right in harsh terms, suggesting they were misguided and even ignorant for opposing a pathway to legalization. “It doesn’t help when you have parts of the conservative coalition that insists on mislabeling a pathway as ‘amnesty,’” he said. “They need a course in remedial English themselves.”

The evangelical leaders’ unequivocal push for immigration reform is all the more striking because on most other topics, religious conservatives have tended to walk in lockstep with the Republican party—particularly social issues such as gay marriage and abortion. But when it comes to immigration, demographic changes give evangelical churches an incentive to embrace a more liberal policy. While the majority of Latinos in the US are Catholic, a rapidly growing number are joining evangelical churches. In 2007, over a third of Latinos identified as evangelicals, up from about 15 percent a decade earlier. “Hispanics are hard-wired to be like us on sanctity of life, marriage and issues of faith,” Land told CNN.

Not all Christian conservatives agree. Groups such as Phyllis Schlafly’s Eagle Forum have loudly opposed the SBC’s efforts, and Focus on the Family has declined to take a position. Still, it’s striking that, according to a recent poll from the Public Religion Research Institute, 60 percent of white evangelicals backed an immigration overhaul plan with a path to citizenship, while just 31 percent wanted an enforcement-only overhaul—a breakdown similar to the general population.

Evangelical leaders say they’re trying to make inroads with Sen. John Cornyn (R-Tex.), the ranking GOP leader on immigration, as well as other Republicans. But so far they’ve found Democrats to be more receptive. Sen. Charles Schumer (D-NY), who’s leading the Democratic reform effort, recently called Land and has been in active dialogue with his evangelical cohort.

The increasingly bitter skirmishes between evangelical leaders and anti-immigration activists could pose a major political headache for Republicans. The GOP made significant electoral gains during the Bush years thanks to an alliance with conservative Christians. If Republicans were to lose the enthusiastic support of that constituency, the party could take a heavy hit at the polls. As the GOP has shifted increasingly rightward on immigration, evangelicals appear to be realizing that it’s not worth sacrificing the long-term future of their churches for short-term political gains for Republicans.