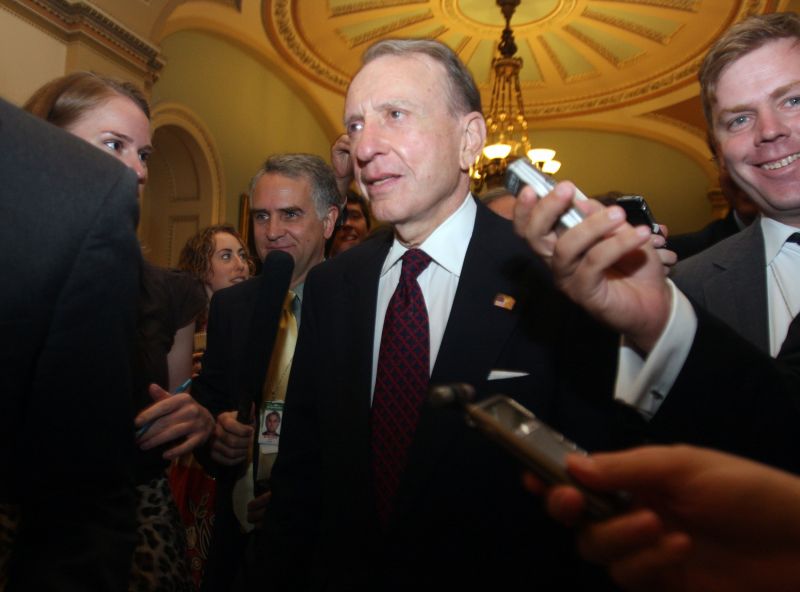 Could Pennsylvania Senator Arlen Specter, in what’s likely to be one of the last major votes of his 30-year career, cast the decisive vote on Congress’ long-awaited Wall Street reform bill? As Senate Democrats jostle behind the scenes to avert an embarrassing, late-round defeat of their legislation, the stage is set for one last highlight for the outgoing veteran-Republican-turned-Democrat.

Two final votes stand between Congress and passage of the Dodd-Frank bill. On the House side, Rep. Barney Frank (D-Mass.), who deftly ushered the bill through the bipartisan conference process, looks to have the votes needed to pass the 2,000-plus-page reform bill. (The House’s version of financial reform passed by 21 votes in December.) The Senate’s picture, however, is far less certain.

Right now, Senate Democrats and their staffs are tight-lipped about the pending Dodd-Frank vote as they try to secure the support of at least 60 senators. A vote was slated for this week, but now the Senate is reportedly delaying its vote on the bill by a week or so due to doubts about whether the 60-vote supermajority is in place.

While the death of Sen. Robert Byrd (D-WV) complicates the situation for Democrats, much of the uncertainty is owed to Sen. Scott Brown (R-Mass.). In late May, Brown joined three other Republicans to vote for the Senate’s version of financial reform. But now he’s threatening to defect and join the rest of the GOP rank-and-file in blocking the bill.

It began a couple weeks ago when, amidst the conference hearings, the junior Massachusetts senator began pushing for a loophole in a provision that would ban banks from investing in riskier companies like hedge funds and private equity funds. Financial giants in Brown’s home state, like investment funds Fidelity and State Street, didn’t like that prohibition, and presumably told Brown so much. In turn, Brown pressed Sen. Chris Dodd (D-Conn.), the Senate’s top negotiator, to water down the ban. Knowing Brown’s vote was in play, Dodd obliged: The Dodd-Frank bill now allows banks to invest up to 3 percent of their capital in these funds, a exemption that more or less swallows the rule, experts and pundits say.

Even after winning his exemption, though, Brown is continung to play hard to get. Now he’s complaining about a $19 billion tax on banks to pay for the implementation of the new reforms, a stipulation added to the bill by Frank on the final night of the conference negotiations. That tax irked Brown, whose vote was considered won. “I’ve said repeatedly that I cannot support any bill that raises taxes,” Brown was quoted as saying on Saturday.

That leaves Senate Democrats in a bind. They need another “yes” to replace Scott Brown and pass Dodd-Frank. It’s all but impossible they’ll lure into their camp a new Republican who’d opposed the bill in May, and the two Democrats who opposed the bill in May—Sens. Russ Feingold (D-Wisc.) and Maria Cantwell (D-Wash.)—have yet to change their minds. Indeed, Feingold said yesterday, “As I have indicated for some time now, my test for the financial regulatory reform bill is whether it will prevent another crisis. The conference committee’s proposal fails that test and for that reason I will not vote to advance it.”

Only two Democrats did not vote on the bill in May: the late Robert Byrd of West Virginia and Arlen Specter. Provided Democrats Harry Reid and Chris Dodd hold onto the other three GOP votes—Sen. Charles Grassley (R-Iowa) and Maine senators Susan Collins and Olympia Snowe—Specter could be the clincher in sending Dodd-Frank to President Obama’s desk.

Judging by Specter’s record, his support is unclear. As a Republican, he voted in 1999 for one of the most consequential—and arguably damaging—financial bills in recent history, the deregulation-heavy Gramm-Leach-Bliley Act. Then again, he voted for the $700 billion bailout in October 2008, a bill many Republicans rejected. And he voted for the Credit CARD Act last spring, a popular bill that cracked down on abusive practices by credit card companies. (Specter’s office didn’t respond to multiple requests for comment on Monday.)

Specter’s handful of contributions to the current bill suggest he’ll vote “yes.” He joined with pro-reform Democrats like Ted Kaufman (D-Del.) and Pat Leahy (D-Vt.) to offer several amendments to the bill bulking up protections for investor and financial-crime whistleblowers. This suggests that Specter is a lock for Democrats when the Dodd-Frank vote takes place.

By switching parties earlier last year, Specter hoped the Democratic Party could do for him what the GOP couldn’t: pave the way for reelection. The party failed. In the end, it looks like Specter’s the one who’ll be helping his new party to victory.