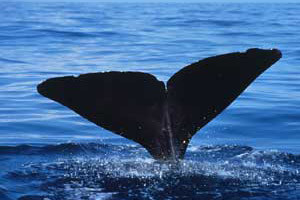 Logic dictates that whales, being the largest mammals in the world, probably take the largest poops in the world. A sperm whale consumes about five times more food each day than does an elephant, which poops out some 150 pounds of dung daily. On land, animal turds can create environmental problems that go far beyond their stench: Methane, carbon dioxide, and nitrous oxide from livestock leavings contribute to 18 percent of global greenhouse gas emissions. So besides humans, are whales the planet’s biggest per-capita carbon culprits?

A new study by Australian biologists calculates that whale poop actually fights climate change. (No small discovery, given that Popular Science once ranked smelly “whale feces research” as one of the ten worst jobs in science). Soupy red doo-doo from the 12,000 sperm whales in the Southern Ocean helps suck up 200,000 tons of carbon from the atmospshere each year—the equivalent of taking 40,000 cars off the road. Which probably makes whales the most eco-friendly mammals on the planet.

Here’s how it works: After gorging on squid and fish, whales return to the surface of the ocean to relieve themselves, leaving behind diarrhea-like plumes that are rich in iron—a nutrient in short supply on the high seas. The iron fertilizes phytoplankton that in turn sucks carbon out of the ocean, sequestering it for centuries to millennia.

A few years ago, the company Planktos used the same basic idea in a controversial scheme to seed the ocean with iron and sell the beneficial results as carbon offsets. But its plan was hamstrung by concerns about unintended side effects. As Mother Jones noted in its story about Planktos, the Sea Shepherd Conservation Society, a maverick operation that harasses whaling vessels, even threatened to intercept Planktos’ ship. We concluded that the Planktos debate boiled down to one uncomfortable question: “Whales vs polar bears, anyone?”

Yet the Australian whale poop study, published recently in the British journal Proceedings of the Royal Society B, points to an intriguing third path: Reviving whales as way to save those Polar Bears, along with the rest of us. The researchers point out that most whale species are now at a mere one to 10 percent of their historical population sizes. They calculate that restoring Southern Ocean sperm whales to their former numbers would sequester an additional 2 million tons of carbon each year.

That sounds like a clear win-win. The question is how to do it when overfishing and yes, climate change, has already thrown the whales’ ocean ecosystem out of whack.