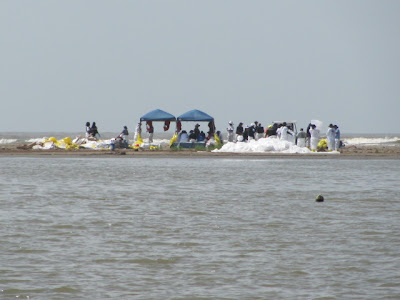 Photos © Julia Whitty.
East Bay, Louisiana. As Kate Sheppard reported earlier today, the government has spent $93 million on the Gulf clean-up so far, and BP has yet to pay any of it back. Here’s what I found BP crews working on Saturday near the end of South Pass, the shipping channel closest to the spill site, in the remote southernmost reach of the Mississippi River.

For reference, the lat-long marker on the bottom right of the map indicates the approximate location of the beach in the above photograph. The three lat-long markers to the left mark (from left to right): Elmer’s Island, Grand Isle, and Barataria Bay. These three are some of the places most heavily hit by oil and also most accessible by car or boat and therefore most heavily covered by the media.
But what about the more remote places that are actually closer to the spill site?

The lat-long marker in this map shows the approximate location of Mississippi Canyon 252, the site of the Deepwater Horizon drilling rig. I’ve guestimated this location from the NOAA oill spill forecast maps. You can see how the closest landfall is at the end of South Pass, on the remote beach in the photograph above. 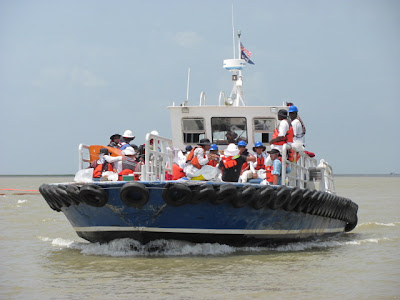 There was an intense hub of activity around these beaches at the end of South Pass. Probably 100 or more men in upwards of two dozen boats. 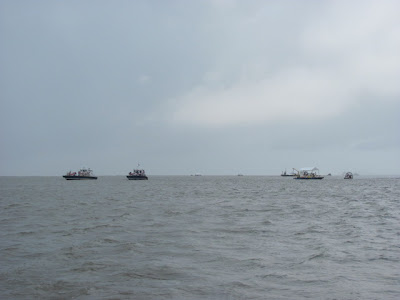 Every kind of boat known to southern Louisiana—airboats, pirogues, pole boats, trawlers, skiffs, crew boats, river barges—were assembled here laying boom, ferrying men back and forth (have yet to see a single woman working any crew anywhere), ferrying bagged sand from the beaches to the barges, dragging absorbent boom. 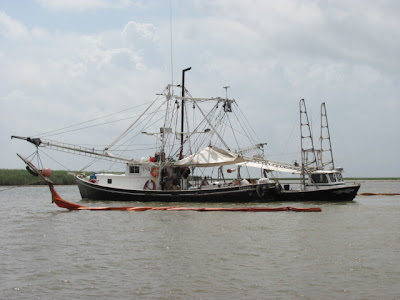 This shrimp trawler is rigged to drag the orange booms to collect surface oil before it makes landfall. It may also drag a white absorbent boom. But this one wasn’t working, just anchored with its outriggers open and the boom at rest in the water. 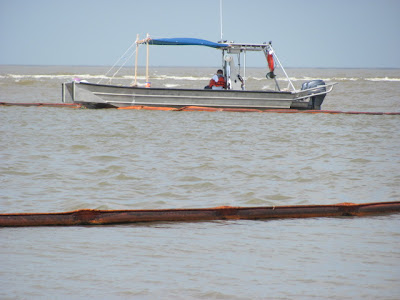 Here’s a guy napping in his boat. Not sure if he’s holding the boom in place or what. 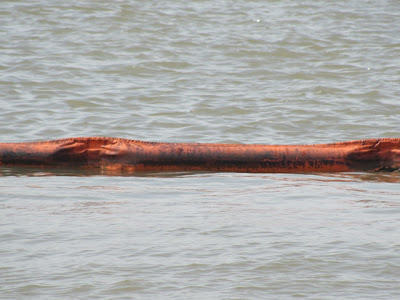 You can see this boom has been heavily oiled. 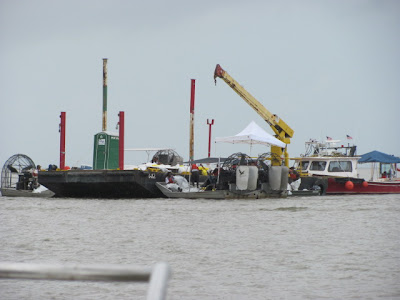 The guys scraping the oil—and probably some kind of absorbent chemical—off the beach (top photograph) were shoveling the contaminated stuff into plastic bags. These bags were ferried offshore by airboats, whose crews tossed them onto this barge. 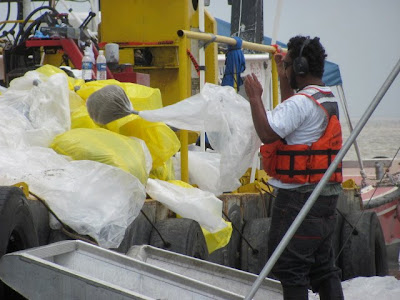 It was an efficient operation. But the vast majority of the wetlands around these beaches were left more or less untended. Maybe they have a boom around them. Maybe not. 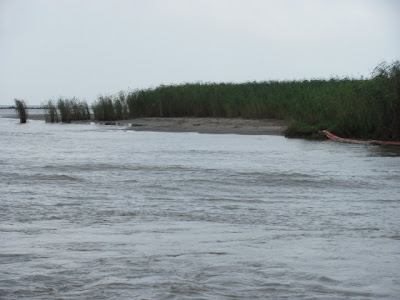 The fishermen we talked to out here who were working the spill, and who did not want their names used because they have been warned against talking to the media for fear of their clean-up jobs, were angry. BP was forcing them to run back into port at the first sign of summer squalls. 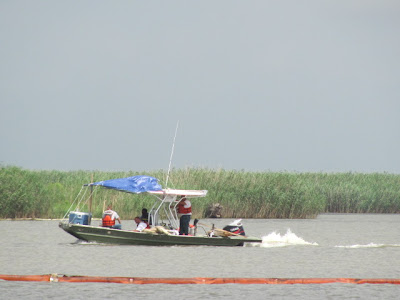 We’re used to this weather, the fishermen said. We know how to run behind an island for shelter and wait it out. Then we want to come right back out and clean again. That’s all we want to do is clean and get this place clean so that we can fish again. At the rate BP is going, it’ll never happen. 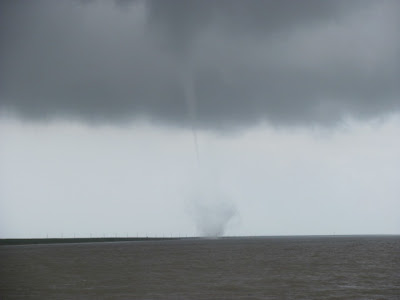 They may have stayed, but we ran like hell when this waterspout came after us, tearing water—and oil?—off the top of the ocean, carrying it further into the marshes.