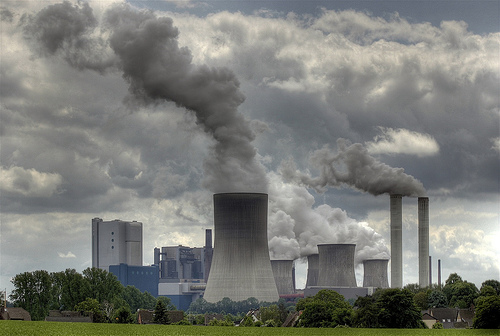 The Democrats’ energy bill remains almost as much of an enigma as it was last week, though now at least we have a broad sense of what it will include. Majority Leader Harry Reid confirmed this week that there will be a “pollution” cutting measure in the package, though he did not actually use the words “carbon” or “greenhouse gases” (even though that’s clearly what he’s talking about).

There’s still plenty of skepticism about whether there are enough Senate votes for any measure to cap and price carbon. But Reid seems confident in including it in a package. There’s still a question, however, as to what that this carbon cap will look like; it seems like the only type of greenhouse gas legislation with a chance of making it into the package will be a utility-only provision, meaning it will only apply to the power generation sector, leaving other major producers of carbon dioxide out of the equation until a later date. There are two utility-only options floating out there right now. Jeff Bingaman (D-N.M.) and Olympia Snowe (R-Maine) have been quietly working on a utility-only measure, dated copies of which have been flying around the Hill this week, though Bingaman is skeptical a cap can pass, even his own. Meanwhile, John Kerry (D-Mass.) and Joe Lieberman (I-Conn.) have also laid out a scaled-back version of their cap-and-trade bill.

So, there are competing versions of a utility bill on the table. A utility-only cap isn’t inherently bad; utilities are the biggest source of power generation. But as Sierra Club executive director Michael Brune said recently, a bill that only targets power plants “has to be very ambitious to go beyond business as usual.”

But in exchange for being the first to be subjected to the new rules, utilities are likely to make a number of demands, and there’s significant concern that those demands might undermine existing Clean Air Act rules, which the EPA has been chugging forward on. Just last week, the EPA issued new regulations on sulfur dioxide and nitrogen oxide emissions. More rules are coming on hazardous air pollutants like mercury, arsenic, and cadmium by 2011. These new rules mark major advances in protecting public health, and they’re also expected to shut down some of the oldest, dirtiest coal plants in the country.

Utilities could ask to shelve those and possibly other clean air rules in exchange for going first. In the original Kerry-Lieberman bill, there was a provision to create a “task force” made up of industry officials and regulators that would review other federal regulations on power plants and consider granting “exemptions” from those rules. If the Senate goes the utility-only route, Frank O’Donnell, president of Clean Air Watch, cautions that this bill might become a “vehicle to weaken” other emissions rules.

Why would it be so bad? Because the new Clean Air Act regulations are going to have bigger, faster, and more substantial effects on the power sector than any watered-down utility-only cap-and-trade system. Those regulations will eliminate more pollution, shut down more dirty coal plants, and avoid more greenhouse gases than a utility-only cap-and-trade system.

Environmental advocates who have been working pushing to get an emissions cap passed for years now are seeing their window of opportunity (at least during this Congress) close. But getting just any old cap probably isn’t worth it if it comes at the expense of many other important clean air laws.

But then again, who knows if BS or KL or any other cap actually makes it into the package. An environmental advocate briefed on the meetings with Kerry said that the senator is “cautiously hopeful that the utility-only can get enough votes.” But while the Massachusetts Democrat is usually the Senate’s biggest advocate for a carbon cap, his meeting this week “was not a cheerleader meeting.”

I’ll have more on the utility-only option and the fate of a carbon cap soon as more details emerge.