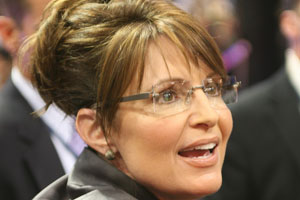 On Monday, Sarah Palin endorsed Kelly Ayotte, the leading candidate for the GOP nomination for Senate in New Hampshire. In many ways, this is good news for Ayotte. Despite her political stature (she was the state’s attorney general), she’s faced an unexpectedly tough primary, with six opponents. (The nominee will be decided on September 14.) Over at Blue Hampshire, Ray Buckley speculates that Ayotte was seeking Palin’s aid as far back as May, when she traveled to Washington to attend a fundraiser for the anti-abortion rights Susan B. Anthony List that featured Palin as the keynote speaker.

But although there’s some evidence that Palin endorsements help in Republican primaries, Palin’s support could end up being a decidedly mixed blessing for Ayotte. Palin is very popular among GOPers, but her overall favorability numbers are not high. Only 39 percent of voters surveyed in a recent Pew poll viewed the former Alaska governor positively, while 52 percent had negative opinions. It’s not like Palin is particularly familiar with New Hampshire, either—when she was there in 2008, she called it the “great Northwest.”

Rep. Paul Hodes, the presumptive Dem nominee, is certainly pleased that his rival has Palin’s backing. “We couldn’t be more thrilled that Sarah Palin chose to endorse Kelly Ayotte,” Hodes’ campaign communications director told reporters on Tuesday. The Hodes campaign even sent out an email explaining that they “hope” Palin comes to New Hampshire to campaign for Ayotte. And Palin’s endorsement isn’t popular with New Hampshire’s most important newspaper, either. On Wednesday, Joseph McQuaid, the publisher of the New Hampshire Union-Leader, slammed the endorsement:

Palin isn’t making these endorsements because, as she claims, she has spent time in New Hampshire and thus knows that the people here are a lot like Alaskans. She spent a few hours here on one day during the 2008 Presidential election. That’s still more time than she spent getting to know Ayotte, but it takes quite a bit longer to know New Hampshire.

McQuaid says that Palin’s endorsement shouldn’t reflect poorly on Ayotte. But she embraced it, and perhaps even sought it out. She must think that New Hampshire voters are “impressed by what outsiders have to say.” Shouldn’t that reflect on her?