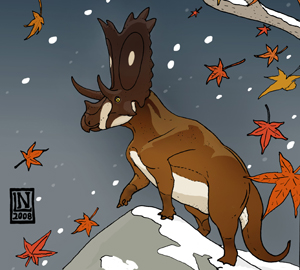 The next time a troll tells us we’re living in the Stone Age—or the Late Cretaceous, at least—we can say, “Damn straight.”

We’ve got a dinosaur named after us: Mojoceratops.

OK, not exactly. Mojoceratops is real, but we can’t take credit for the name. It’s actually the brainchild of Nicholas Longrich, a researcher in Yale University’s geology department who, um, rocked the world of rocks this month with news that he’d discovered a “new” dinosaur. The proper name for this crazy-looking creature came to him as he was discussing his groundbreaking work with colleagues. At a bar.

“Yes, there was beer involved, but we weren’t, like, pissed,” he laughed when MoJo caught up with him today. “I didn’t even think about it, I just said it.” He and his friends tried coming up with a few serious names, too, but none of them quite measured up.

It just rolls, like a steady wind over the fossil-rich soil of Western Canada: Mojoceratops.

Did we mention it was a plant-eater? What’s more: Mojoceratops ate organic and local.

Dude, that’s totally gotta be named after us.

Us-inspired or no, the story of how Longrich discovered and named the dino bears more than a passing resemblance to this news organization’s investigative process. The intrepid paleontologist—an expert in evolution who’s spent the past few years traipsing about the Canadian mud and the brush, hunting for more evidence of dinosaur life—knew something was fishy when he found a fossil sample in the basement of New York City’s American Museum of Natural History.

“I just saw this unusual skull that didn’t really fit anything I’d seen before,” he said, describing its “really beautiful chocolatey brown and slatey blue color.” (The man clearly loves his work.)

Upstairs, in the museum’s display collection, Longrich found a similar skull and realized it had been reconstructed to look like another existing dinosaur’s. “They just completely screwed up everything, and no one realized it was fake,” he said, the excitement in his voice palpable. Thus began two years of intense, isolated sleuthing. “Most of the time you don’t get that beautiful skull. You get bits and pieces and have to figure out what’s going on, like putting together a big puzzle.”

His thesis—that an unknown dino lay mislabeled and undiscovered—challenged the conventional wisdom, and he knew he needed airtight evidence. Prevailing views in his field, he says, are sometimes as ossified as—well, fossils: “It’s easy to accept the conclusions and not go back to check the ground truth of it.”

But in the end, he had enough evidence to publish his findings in this month’s Journal of Paleontology. He just needed to defend his choice of a name for the rhino-sized beast with the funny, frilly head.

“I looked up the etymology of ‘mojo,’ and it turned out the original term refers to a magic charm used to attract members of the opposite sex,” Longrich said. Since he’d surmised that was the function of the “heart-shaped frill” on the dino’s coif, “It just happened to be very descriptive.”

We at MoJo wish all our beer-fueled ideas turned out to be equally meaningful.

And though we weren’t the main inspiration, Longrich said he’s picked up our magazine before, and he’s likely to do so again. Paleontology, after all, is just a rigorous kind of environmentalism.

“There’s an extraordinary number and variety of species out there,” Longrich said. “There’s a lot left to discover.”