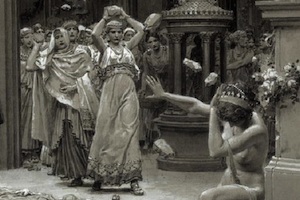 The National Review Online seems to be the designated dumping ground for any and all opposition research related to Supreme Court nominee Elena Kagan. On the second day of her confirmation hearings last week, NRO created a big stir when it published a critical piece from a former Justice Department official who claimed Kagan encouraged the American College of OB/Gyns to alter its medical opinion of the partial-birth abortion procedure to help President Clinton’s political position on the issue. Several Republican senators asked Kagan questions during the hearing that came almost straight from the story. Today the NRO is capitalizing on recent news about Sakineh Mohammadi Ashtiani, the Iranian mother about to be stoned to death after being convicted of adultery, to revive charges that Kagan is a Muslim-loving “champion of sharia.”

Had the solicitor general heard about Ms. Ashtiani’s plight, one imagines, she’d have told her to get herself to the nearest courthouse and seek the protection of the law. Alas, it is pursuant to the law that this barbarity will take place. The stoning of this 43-year-old mother of two has been ordered by a court in her native Iran, where the only legal code is Allah’s law, sharia. …

Sharia is the cause of indescribable suffering in the world: for homosexuals, women, non-Muslims, and Muslims who wish to embrace the West. Yet for Kagan, sharia’s repugnance is irrelevant. Like opposition to DADT and support for abortion, the engagement of Islamists, the embrace of their case against American capitalism, is a progressive cause célèbre. So count Ms. Kagan in. She’ll worry about logic and sharia victims like Sakineh Ashtiani later — if ever.

Linking Kagan to sharia-sanctioned stoning is a huge stretch, but McCarthy gives it a whirl. His argument goes something like this: While Kagan was at Harvard law school, Harvard University president Larry Summers accepted a $20 million gift from Saudi prince Alwaleed bin Talal, who once blamed American foreign policy for the 9/11 attacks. Summers not only took his cash but named an Islamic studies program after the prince. (Incidentally, bin Talal owns a big chunk of Rupert Murdoch’s News Corp., the owner of Fox News, but McCarthy doesn’t slam Murdoch for it.)

Kagan did not offer up a peep of protest, probably because she was too busy banning military recruiters from the campus, according to McCarthy, who notes that sharia law is far harsher to gays than the US military is. Not only did Kagan fail to protest the Saudi gift, but according to McCarthy, she “forged” an “Islamic finance project” at Harvard to promote “sharia compliance” in the U.S. finance industry. Ergo, Kagan must support stoning, since that’s part of Islamic law. (For the record, Harvard University created the IFP in 1995. In late 2003, it was brought into the law school, which Kagan wasn’t named to run until April that same year. And the program’s study of sharia compliance is often related to poverty-reduction efforts through micro-lending.)

Conservatives tried this line of attack on Kagan shortly after she was nominated, but it didn’t gain much traction. None of the members of the Senate Judiciary Committee asked her about her feelings about sharia (or stoning, for that matter) during her confirmation hearings. But now that the NRO has taken up the cause, it’s likely to be part of the anti-Kagan drumbeat as the committee gets ready to vote on her confirmation, which could happen as early as Tuesday. It’s hard to know whom these attacks are designed to persuade. Most of the Republicans are already set to vote against Kagan. There are the moderate Maine senators, Susan Collins and Olympia Snowe, who voted to confirm Justice Sonia Sotomayor last year. Perhaps the sharia link might give them adequate cover with their feminist base to join with their party (and the cranky tea party) in opposing Kagan’s nomination.  Even so, Kagan doesn’t need their votes to get confirmed. Could there be some wavering conservative Democrats out there?