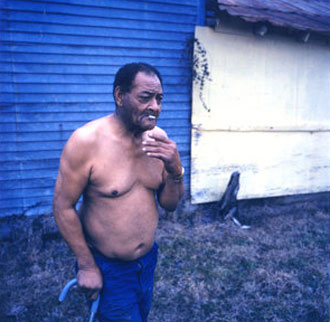 For reasons largely to do with music, I stopped off in Chicago this past May on my move from New York out to San Francisco. I wanted to check out Jazz Record Mart, the somber city’s best place to find both pre– and post-World War II blues and jazz records. I wasn’t there to buy anything though, as I had decided not to take my record player with me to California. (This decision was simply a logistical one: I was traveling by train and the unspoken rule at Amtrak, for those of you who aren’t familiar with our nation’s lovably frumpy rail system, is that despite what its website may tell you about baggage limits and checks, you can bring exactly as much—or as little—as you can carry.) But then I found myself inside Jazz Mart standing in front of five records by the truly one-and-only bluesman Junior Kimbrough and I did what any unreasonable person would: I bought them all.

The records weren’t cheap, and without a record player, it wasn’t clear I was going to be able to listen to them anytime soon. So why did I buy them? My reasoning—and the point of this little anecdote: Junior Kimbrough is just that good. When you happen upon his 1992 debut album “All Night Long” in a record store, you just don’t pass it up. Despite his name, Junior was no amateur; he would be 80 years old this week had he not passed away in 1998. He had been playing songs in his tucked-away juke joint “Junior’s Place” for more than three decades before recording his first album. Though relatively unknown to most of the world during his lifetime, Junior and his juke joint were treasured by fellow musicians. His birthday seems as good a reason as any to dust off his records and consider why that was.

Junior first started Junior’s Place in his house in Mississippi the 1960s, where he was a long-time neighbor, friend, and competitor of the relatively more commercially successful R.L. Burnside, and where he gave musician Charlie Feathers his first guitar lesson. (Feathers would later called Junior “the beginning and end of all music.”)

In the 1970s Junior moved Junior’s Place to a small shack not far away. The original house has since burned down. And in the 1990s Junior moved his juke joint again, this time to an abandoned church in Holly Springs, Mississippi, where he soon recorded “All Night Long.” On the wall of the interior to the third and final Junior’s Place was—among other things—a painting depicting Opera Winfrey as an African Princess and an ocean mural behind the stage. In an article for the online magazine Perfect Sound Forever, Sylvester Oliver of Mississippi’s Rust College described the atmosphere of Junior’s Place: “The people there seemed to be the disinherited, the poor, and sometimes wayward individuals looking to ease their pain from the pressures of everyday life. There was a natural tendency of these people to divest themselves of phoniness and pretentiousness and let it all hang out, so to speak. There were usually more people outside engaging in merrymaking, who never entered the house and were content to listen from afar.”

Fat Possum Records—the label that recorded Junior throughout the 90s—considers him “among the three greatest bluesmen of all: Son House, Bukka White, and Fred McDowell.” Rolling Stone said “All Night Long” “confirmed that in the right hands the blues are still one of America’s most vital musical forms.” Artists, including the Rolling Stones, are said to have traveled to Holly Springs to meet Junior and play at his juke joint. The church that housed Junior’s Place has since burned down. Junior died of heart failure in 1998 sitting in his easy chair in Chulahoma, Mississippi. He is said to have fathered 36 children. Some of them were present at his death. That year another album of his was released. “God Knows I Tried,” it was called.

Listen to Junior Kimbrough perform the song “Meet Me in the City” here.