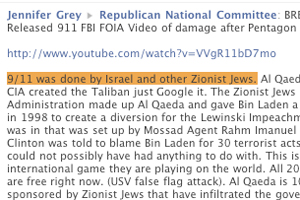 Israel is responsible for 9/11, Al Qaeda is “100% state sponsored by Zionist Jews,” and White House chief of staff Rahm Emanuel is actually an agent for Mossad, the Israeli spy agency—at least according to posts that appeared on the Republican National Committee’s Facebook page. (You can see screen shots of some of the posts below.)

Several avowedly anti-Semitic commenters regularly posted on the national GOP’s Facebook wall, encouraging tea partiers and “White, Black, Spanish, [and] Asian” people to “arm yourselves” and rise up against the “Zionist Jews” who, they claim, control the country and the media. They linked to a site that hosts purported versions of the “Protocols of the Elders of Zion” and promoted 9/11 “truth” theories that allege “Israeli agents carried out the attacks.”

The RNC could easily have deleted these comments—it’s as easy as clicking “remove” if an administrator is signed in to the account—or blocked the users who were posting them. Even if the RNC decided it didn’t have the resources to monitor its Facebook wall, it could have simply disabled the ability to comment on its wall. When Mother Jones contacted the committee for comment Thursday morning, the RNC disabled its Facebook discussion board, but not its wall containing the anti-Semitic comments. When a Mother Jones reporter explained the difference between a Facebook discussion board and a wall, RNC spokesman Doug Heye promised the wall “will be down shortly.” (UPDATE, July 30: The comments have been removed, but the wall is still up.)  “We’re interested in a civil debate, and any rhetoric or language that is out of bounds is not something we’re interested in hosting and not something we’re interested in hearing,” Heye said. “We have decided we are better off closing down our discussion page.” That’s what Organizing for America has done with Barack Obama’s Facebook page. (The White House’s wall, however, is still live.) But until it was contacted by Mother Jones, the RNC allowed commenting to continue unabated—and apparently unmoderated.

Kevin Anderson, a Californian Facebook user who describes himself as a “staunch Republican,” alerted Mother Jones to the comments. Anderson says he was banned from commenting on the RNC’s Facebook page after he complained about the anti-Semitic comments to committee officials. He claims that “hooked nose” style photos initially accompanied the posts. Those photos were removed when he first threatened to contact the press, he says.

At Mother Jones, interns review every comment that comes through the system, and delete the most offensive ones, along with a whole bunch of spam. Mother Jones also has an intern who monitors the magazine’s Facebook wall.

Some media organizations have taken different tacks—ignoring comments entirely. But Andrew Rasiej, the co-founder of the Personal Democracy Forum, says that’s not an option for politicians and political organizations. “I don’t think that’s acceptable,” he says. “If they have comments open, then they’re inviting reasonable people to comment. To allow a free-for-all means you are not respecting the reasonable commenters.”

A review of the Democratic National Committee’s Facebook wall during the past month reveals one commenter warning his “fellow Africa-Americans” to “be on the watch for jews with anti-black behavior.” The DNC page also shows many posts from Anderson pushing Republican talking points—and trying to draw attention to the anti-Semitism on the GOP page.

“While I don’t think this indicates anti-Semitism among the GOP leadership,” Anderson writes. “I feel it indicates that there is a certain laxity among GOP workers in removing anti-Semitic screeds from GOP sounding boards. However, as this is an OFFICIAL GOP sounding board sponsored by the Republican National Committee and moderated by GOP employees. I think you might have room to indicate certain biases among the workers at the GOP and indicate an ethical climate of its official party organs.”

This isn’t the first time the RNC has gotten in trouble for the content of its Facebook page. Last October, it kept a number of racist pictures of Obama (including one saying “miscegenation is a crime against American values”) on its page for nearly a week before removing them.

Screen shots of the RNC posts follow below. You can also look at a large (11.7 MB) PDF of the posts from the month of July.