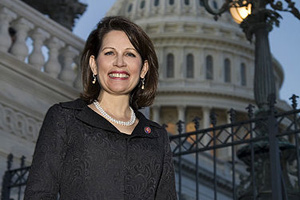 <a href = "http://commons.wikimedia.org/wiki/File:Bachmannofficialphoto.jpg">Wikimedia/Creative Commons </a href>

Rep. Michele Bachmann (R-Minn.) and 20-some other House Republicans launched their newly formed Tea Party Caucus with a meeting Wednesday morning in the House Armed Services Committee hearing room—a seemingly appropriate nod to the movement’s hopes for political insurrection. The Tea Party Caucus has now turned the anti-government uprising into part of the Washington apparatus itself, becoming the latest litmus test for whether House Republicans have opened their arms to the activists. But it’s still unclear what the caucus will actually do for the movement, because members insist that the group will not represent or speak for tea partiers—merely listen to their concerns.

And the Tea Party Caucus insists that the movement it’s based on certainly isn’t racist. At the press conference, Bachmann paraded out a whole roster of minority tea party members to counter the mounting accusations that the movement is biased and hateful. First up was Danielle Hollars, a black stay-at-home mother of five from Virginia, who clutched her 9-month-old infant while she denounced accusations that tea partiers were “terrorists” and “racists.” Next came Ana Puig, a immigrant who declared that America “was going down the same path to 21st century Marxist dictatorships” that has supposedly taken hold in President Lula’s Brazil and Hugo Chavez’s Venezuela.

Other speakers included mini-media-celebrity Tito Munoz, aka “Tito the Builder,” the conservative activist who Sarah Palin propelled to fame in 2008. And there was also Keli Calinder, a young Seattle activist—who was white, to be sure, but whose multiple tattoos and plastic-rimmed glasses gave her the look of a liberal, coffee-shop dwelling hipster.

The Tea Party Caucus itself has a lily-white roster of members, but the Republicans insisted that the handpicked group of activists on display were representative of the movement. “You’ve heard today from people across the country from various ethnic groups about how they feel about the government,” said Rep. Dan Burton (R-Ind.) “That should dispel an awful lot of rumors about racism and other things.” Other members rehashed the line that the racist and homophobic slurs hurled at Democratic members during the health-care vote must have come from liberal plants deliberately trying to undermine the tea party movement.

The entire event was clearly staged as a PR campaign to counter the effects of the tea party’s recent showdown with the NAACP and the clumsy racist satire penned by Tea Party Express leader Mark Williams, who has since been repudiated by other organized factions of the movement. But aside from cleaning up and legitimizing the tea partiers, the founding members of the Tea Party Caucus didn’t have much to say with regard to their future agenda.

Would the caucus offer up its own legislation—or play a substantial role in shaping existing bills, akin to the Blue Dog Caucus in the Democratic Party? Bachmann was non-committal: “We’ll see.” When asked what the caucus thought of the financial reform bill that’s about to become law, Bachmann refused to “speak on behalf of the tea party movement.” The only concrete idea that Bachmann mentioned is her current pet project to allow House members to use Skype “to have a bigger earphone to listen to the people.”

Certainly being able to bear the official mantle as a Tea Party Caucus member could give a boost to Republicans who want to affirm their anti-Washington cred. But it’s also the latest step towards the total convergence of the purportedly bottom-up tea party with the right wing of the Republican Party. Already, tea party sympathizers like House Minority Whip Eric Cantor (R-Va.) and Rep. Jason Chaffetz (R-Utah) have refused to join the caucus, saying the insurgency was better off as an actual grassroots movement. And at least two Congressmen listed as caucus members say they have not officially joined, while other members said they were not aware that the list of names would be released, according to FrumForum.

Bachmann and the other caucus members may insist they’re earpieces and not mouthpieces for the tea party, but they’ve now officially anointed themselves as the movement’s proxies in Washington—and the Beltway will accordingly treat them as such. As a hoard of television cameras chased after Bachmann as she was leaving the podium, Tito the Builder turned to her and asked, “Why did they all ask questions to you and not questions to us?”