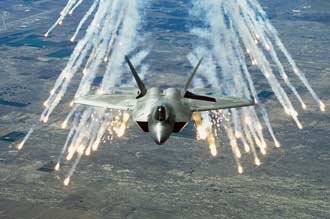 If you need evidence of media complicity in support of what author Andrew Bacevich calls the “Washington Rules“—aka the national security consensus that justifies our militarism around the globe—look no further than today’s Washington Post.

Here you’ll find a fawning A-1 article by Laura Blumenfeld—apparently a big fan of 24—about the brave men and women of the Obama administration who stay up nights keeping America safe. Here’s her summary:

With two wars, multiple crises abroad and growing terrorism activity at home, these national security officials do not sleep in peace. For them, the night is a public vigil. It is also a time of private reckoning with their own tensions and doubts. They read the highest classification of intelligence. They pursue the details of plots that realize the nation’s vague, yet primal, fears.

Now check out this bit on Robert M. Gates—human being—who sacrifices his peace of mind for our safety:

The secretary of defense must be reachable at all hours. He transmits orders from the White House to the Pentagon in an era when troops operate in every time zone. If North Korea tests a nuclear weapon or Iran tests a new missile, Gates needs to know now. “I don’t feel like I’m ever really off,” he said earlier. “I have security and communications people in the basement of my house. They come up and rap on the basement door.”

Next to his bedroom at home, he confers in a sound-proof, vault-lock space. He calls it “The Batcave.”

Gates smiles. He radiates control: individual white hairs lie combed into place; a crack in his lips is smoothed repeatedly by ChapStick. But even this confident cabinet secretary—the slightly feared Republican, whose status others covet by day—slips, at night, into the shadows of doubt.

At his compound in Washington, he’ll change into jeans and a baseball cap and take a walk after 11 p.m. He’ll count the number of surveillance cameras watching him and look out into the dark and reflect on the “persistent threat. You know, and you wonder, what more can you be doing? What have we missed?”

Will somebody please get me a bucket?

Pardon my skepticism, but exactly how does squandering of hundreds of billions of dollars annually to garrison US troops and conduct military exercises and training in every corner of the globe make America safer? Isn’t there just the remote possibility that our meddling in everybody’s business might cause a little, you know—resentment?

As a reporter, I understand the impulse: Let’s tell a story about what it’s really like for these guys. And Blumenfeld had great access. But this is precisely the kind of story that perpetuates the longstanding myth that American interests are under siege—a myth that DC power players have been peddling since at least the Cold War era.

Back then, top officials—notably CIA chief Allen Dulles and Strategic Air Command top dog Curtis LeMay—vastly exaggerated the motives and capabilities of the Soviet Union, insisting that we expand covert operations and build nuclear capabilities that could annihilate the entire Soviet Bloc 100 times over. (Bacevich covers all of this in his upcoming book.)

Ike complained, to no avail, about the national security establishment’s vice-grip on DC: The phrase “military-industrial complex,” which these days elicits eye rolls from acquaintances at cocktail parties, originated from his final speech. JFK, for his part, further perpetuated the DC myth, using it as a rationale to go after Cuba—that existential threat to American interests. Then came our ill-advised adventures in Vietnam, the CIA’s subversion of Iranian democracy—thanks BP!—and the good ol’ Saddam-WMD ruse. Lessons learned? Hardly. Even Mr. Change, Barack Obama, doesn’t openly question America’s prerogative to “bend the arc of history.”

In short, the subjects of Blumenfeld’s story and their predecessors have a strong interest in keeping us on the edge of our seats. Our fear, after all, justifies their oversized post-Soviet budgets. Our fear gives them power and purpose. It’s their raison d’etre. Just ask Dick Cheney.

Funny, isn’t it, that we have to turn to the likes of Congressman Ron Paul as the voice of reason. Just yesterday, Paul voiced his opposition to more funding for US military efforts in Afghanistan. While I disagree with the man on many things, I have to give him credit for questioning DC’s deceitful hubris.

“We are fighting a war that essentially is not a war,” he says. (Watch below.) “We’re fighting a war against individuals that have no tanks, no planes, no ships, no modern technology—and we’re not doing well. There’s something wrong…Our generals are trained to fight wars; they’re not trained to be nationbuilders and social workers and policemen.”