Fort Ticonderoga, New York—Our road to Ticonderoga, site of Ethan Allen’s critical Revolutionary War victory, was complicated by the minor detail that, as of December, said road no longer exists. The only functional bridge over Lake Champlain from Vermont was condemned last year, and, in the fashion befitting cookie-cutter baseball stadiums, subjected to a controlled demolition on local television. The night the bridge closed down, the ferry at Larrabee’s Point stayed open all night to receive the excess passengers. It was, says Nina, the storekeeper at the Orwell, Vt. convenience mart, “a pretty big deal.” We take the ferry instead. 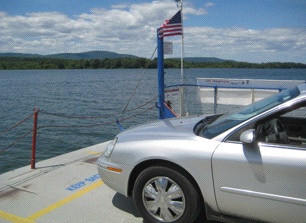 I’m headed to Ticonderoga both because of Allen (more on him later), and because of my lifelong fascination with #2 pencils. And although I don’t end up going into the fort, I do meet Evan Zgonis. Zgonis, 68, of Dracut, Massachusetts, flags me down near the park’s entrance. He sees my Red Sox shirt, I guess, which makes us brothers. As we talk, a band of college-age redcoat re-enactors are practicing the flute at a pair of picnic tables.

His grandkids are about to start elementary school, where they’ll learn US history for the first time. He wants to give them a head start “I was here for my kids,” Zgonis says. “And now it’s the turn for my grandkids. Americans, they have to know their own history.”

His outlook, he says, has been shaped in large part by his experience as an immigrant from Greece. He studied engineering in Sweden, where he met his wife. “I had my relatives earlier. I found opportunity. Most of my kids—one is a doctor, one is a physical therapist, one is a registered nurse. And then my wife she raised the family and now she’s a registered nurse. They call it the country of opportunity, and this is true. Believe it. I know.” 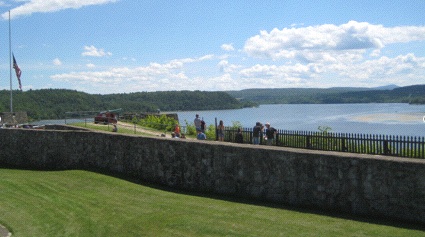 “Americans, They Need to Know Their History”: (Photo: Tim Murphy)He’s concerned that today, undocumented workers want to become citizens for the wrong reasons. They just don’t appreciate what it means to be an American. “You have to live in the country to feel the country—to feel the country! To be a part of the country! You feel it inside. You are American now. You can’t just do it for benefits.”

We agree to disagree, Evan and I. But I’ll leave him with the last word. “What I believe is the US has to receive good, educated people into the country. If you bring educated person here, you have opportunity for progress—for the country, for civilization.”