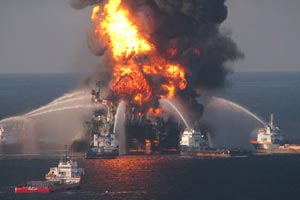 In mid-June, when oil was still gushing from the Gulf well with no end in sight and pressure was mounting on the administration to show some spine, Obama called BP’s top executives to the White House for a summit. The parties emerged with an agreement that BP would set aside $20 billion in a fund administered by an independent mediator to compensate business owners and residents who suffered economic damages because of the spill. The president said the fund would “provide substantial assurance that the claims people and businesses have will be honored” and would ensure that BP followed through on its promise to make Gulf residents whole. “The people of the Gulf have my commitment that BP will meet its obligations to them,” said Obama.

But the specifics of that agreement for the $20 billion fund were finally released last week (full agreement is here), and critics are now saying say the plan jeopardizes the government’s ability to hold BP accountable. In a letter to President Obama last week, the watchdog group Public Citizen outlined “very serious concerns” with the structure of the deal. The company agreed to deposit $5 billion into the escrow fund this year and $1.25 billion every quarter from 2011 through 2013, for a total of $20 billion. But securing the money is contingent upon BP’s Gulf subsidiary remaining profitable—which, of course, might not happen if the federal government follows through with the kind of criminal and civil penalties and that many Americans believe the company should receive for it’s negligence in the disaster. Another problem: The plan actually creates a perverse incentive for the company to increase drilling offshore in the United States, since under the terms of the deal, the money in the fund will come from revenue from BP’s Gulf of Mexico drilling operations.

If the government gets serious about cracking down on BP, the oil giant could face up to $21 billion in fines for Clean Water Act violations alone. At some point, the federal government is also going to send the company a bill for the damages to natural resources. There are also likely to be major fines for worker health and safety violations, considering how many people died or were injured in the blast. And don’t forget the ongoing criminal probe into the disaster, which could determine further liability for the company. But Public Citizen warns that under the terms of this agreement, it’s likely that the government “would be reluctant to mete out harsh sanctions to BP”—sanctions like banning the company from obtaining new leases in the Gulf, a measure included in the House spill bill.

“The proposed arrangement is wildly inappropriate, as it will make the government and BP virtual partners in Gulf oil production,” says Tyson Slocum, director of Public Citizen’s energy program. “It will give the government a financial incentive to become an even bigger booster of offshore oil drilling in the Gulf.”

Public Citizen is lobbying for the feds to renegotiate a deal that ensures that victim compensation does not come at the cost of letting BP off with a slap on the wrist rather than meaningful sanctions. Considering the fact that 11 workers died and 17 were injured in the explosion on April 20, and the resulting spill unleashed a record 4.9 million barrels of oil into the US waters and caused untold environmental and economic damage, Public Citizen believes the deal should be much harder on BP. “If you can’t negotiate a good deal with those facts in front of you, then you need to get new negotiators,” said Slocum. “I don’t know what the administration is thinking on this.”