Here’s the report I referred to in yesterday evenings blog post, BP’s Oil Far From Gone, disputing NOAA’s claim that 75 percent of the Gulf oil is “gone.” Current Status of BP Oil Spill was released by the Georgia Sea Grant and the University of Georgia. It begins:

On August 2, 2010, the National Incident Command (NIC) released a report on the status of oil from the BP oil spill. The findings of the report are being widely reported in the news media as suggesting that 75% of the oil is “gone” and only 25% remains. However, many independent scientists are interpreting the findings differently, with some suggesting that less than 10% is “gone” and up to 90% remains a threat to the ecosystem. Considering the vulnerability of the southeast Atlantic coast to oil being carried our way by the Gulf Stream, it is critical that we determine which of these interpretations of the report is more accurate. 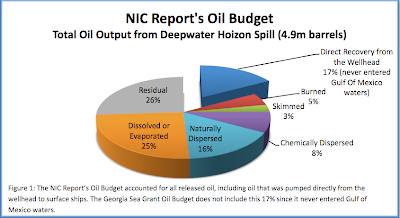 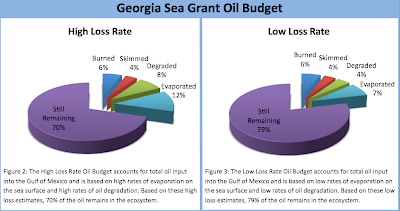 Charles Hopkinson, director of Georgia Sea Grant and professor of marine sciences in the University of Georgia Franklin College of Arts and Sciences, and the report’s author, tells UGA:

“One major misconception is that oil that has dissolved into water is gone and, therefore, harmless. The oil is still out there, and it will likely take years to completely degrade. We are still far from a complete understanding of what its impacts are.”

More from the report:

There are no data available from the scientific literature or the National Incident Command on rates of decomposition or weathering of oil released from the BP spill. Because so much oil exists as micro-droplets in deep, very cold ocean waters, it is difficult to infer decomposition rates from studies of previous spills occurring closer to the surface. However, several scientific studies are currently underway to directly address this critical need.

We asked our scientific experts to estimate, as best they could, the percentage of subsurface oil that has degraded. They suggested a range of between 5% (see Figure 3) and 10% (see Figure 2). Given that estimate, we calculated that between 168,000 and 319,000 barrels have been removed from the Gulf through degradation. This is equivalent to 4-8% of the total oil released into the water.

However, it is important to realize that the degradation of crude oil by marine organisms mostly entails short-chain hydrocarbons—not the more toxic, polycyclic aromatic hydrocarbons (PAHs). Mass balance calculations, such as we are doing here, do not reflect this preferential decomposition. The most toxic components of crude oil are the least likely to be naturally degraded.