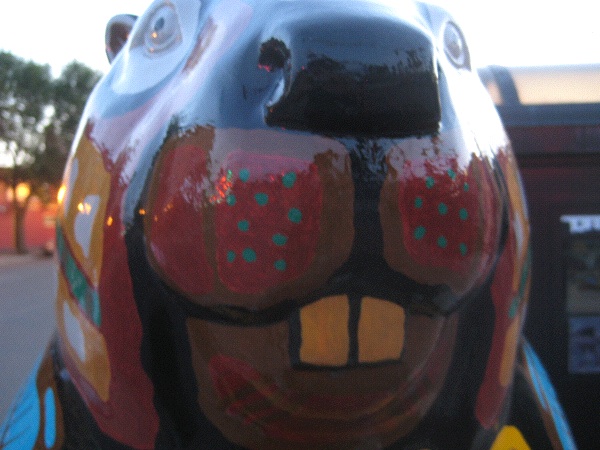 Not this one: Some cities do cows. Some cities do bears. Bemidji did beavers. Cue controversy (Photo: Tim Murphy).Bemidji, Minnesota—The most controversial piece of public art in the state of Minnesota sits on the corner of 4th Street and Beltrami Ave., in downtown Bemidji. For now. When I asked for directions at the Blockbuster outside town, I was told it had been moved. When I asked again at the supermarket, I was told it was no longer there. “But it’s exactly what they say it is,” said the teenaged boy at the deli counter, stifling a laugh.

“To be honest, I don’t really understand why it’s so controversial,” say Christine Lundquist, sitting on a bench with her back to the controversy. “I guess they decided freedom of expression was no longer in the Constitution. That’s how Deb wanted to paint it, and that’s how it should be.”

“I sit out here and read a lot. I eavesdrop—and I’ve only heard one negative comment. They said, ‘That’s disgusting!'” She rolls her eyes. “I mean, obviously it’s a vagina…”

What happened was this: The big deal among city beautifiers these days is to invite local artists to paint a symbolic local animal. Bennington, Vermont had cows; DC has pandas; Fargo has bison. Bemidji, home of the NCAA Frozen Four-qualifying Bemidji State Beavers, naturally chose the bucktoothed, paddle-tailed rodent that’s indigenous to its little stretch of northwest Minnesota. It’s a nice little deal: Kids like them, they’re (usually) more interesting than your average streetlamp, and it throws a little bit of work to the artists, who are, presumbly, starving. Win-win-win. 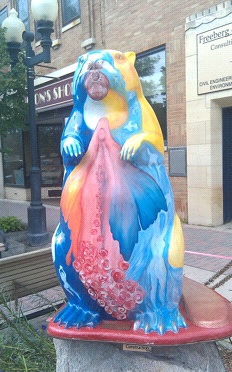 Banned in Bemidji: “Gaea,” the little lady who started this whole broohaha (Photo: Tim Murphy).Unless, of course, a handful of local residents accuse you of peddaling smut, which is what happened when Deborah Davis unveiled her own interpretation of the Bemidji Beaver. “Gaea,” a celebration of Earth and womanhood. Or, as protesting Bemidjians put it, “pornography.”

“I work right on the block, and I walked by it for a week-and-a-half and didn’t really think anything of it, and then one day I did a double-take and it was gone,” says Christine. “Someone must have complained, because someone always complains.”

After hearing the complaints, the city manager ordered that the statue be removed, temporarily relocating Gaea to a townsperson’s front yard. Then, once they realized they’d just censored a pretty innocuous work of art that they themselves had commissioned in the first place, the city council voted unanimously to bring it back. And then the vandals struck, covering the mid-section with black paint. And now it’s back, for now, although it’s probably only a matter of time before someone decides it’s too close to Ground Zero and the cries start up again.

Davis, for her part, insists there’s nothing to see here. As she told the Star-Tribune last month, “I didn’t understand that some people saw genitalia. … I understand people see different things in art, and they need to be free to do that. … My intent was to paint a praying woman.”

Whatever the case may be, the elderly, camera-toting Floridian I met across the street from the installation, has some advice for protesters: “Put on your big boy pants and get over it.”

Unreledatedly, (except, I guess, on the subject of “big boy pants”) by far the best reason to ever go to Bemidji is to see the towering sculpture of Paul Bunyan and Babe the Blue Ox. The attention to detail is staggering: