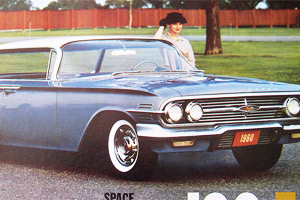 Guess who’s back? The Big Three and Detroit. Well, maybe Detroit. On Monday, the New York Times showed some serious love for Chrysler, Ford, and GM’s willingness to pursue a new way of doing business:

Many of the excesses of the past—overproduction, bloated vehicle lineups, expensive rebates—are gone. All three carmakers have shed workers, plants and brands. And a new breed of top management—the three chief executives are outsiders to Detroit, as is the newly named GM chief executive — says it is determined to keep the Big Three lean, agile and focused on building better cars that earn a profit.

The proof is in the sales pudding: in July, GM, Ford and Chrysler sold their vehicles at for $1,350 more than a year ago—outpacing the broader auto industry’s gain by about $200. The Times credits the Big Three’s resurgence to a strategic draw-down in inventory and cuts in labor costs. With General Motors’ historic IPO pending, good times are supposedly right around the corner. And not-CEO-in-chief Barack Obama is only too happy for Treasury to begin selling off its 61% majority share in the company—just in time for elections.

But what about jobs? The White House has always insisted that the auto bailout had to happen to save the midwest. But looking at the numbers, it’s hard to get too excited:

While Obama has trumpeted the figure of 55,000 auto jobs added since June 2009, this remains a puny number both in absolute terms, as well as relative to auto employment overall—which exceeded 1.1 million in 2005. It also comes out to over $1 million in taxpayer assistance per job created. . . . Corporate welfare has turned out to be enormously profitable for auto executives, but has saddled the taxpayer with enormous risk and costs, while doing little to benefit American workers.

Automakers and their suppliers shed 330,000 jobs in 2008 alone. Suddenly 55,000 doesn’t sound like such a big number. Relocation prognosticators in Michigan think that around 2,500 jobs are on their way to the state in the next two years—a development that will supposedly lead to a real estate boom. But economic analysts say that new manufacturing jobs will command lower wages, and won’t do enough to balance out the massive job losses of the past ten years.

It would be unfair and a little ridiculous to suggest that the recovery should have already completely restored all of the jobs the economy lost in recent years. In fact, there’s no real reason to think that the Big Three or Obama even want to restore the automaking labor market to its full capacity: if the idea is to cut inventory, boost efficiency, and streamline business, it makes sense that the key stakeholders would want to do more with less. When you’re creating a brand-new business model, just how many recovered jobs equal a recovery?

In the end, it’s unclear what the bailed-out Big Three will offer blue-collar workers. The Times points out that a big chunk of Chrysler’s new hires are white-collar types brought in to work as entry-level engineers and managers at its suburban HQ. Detroit’s tax base could certainly use a shot in the arm, but it’s not the suburbs that need the push. They’re not in danger of falling off the face of the planet. That’s not to say that the birth of the leaner, meaner Big Three necessitates yet one more death for the working class. But it’s not enough to say that jobs are coming back. We’ll also have to watch what kind of jobs they are—and how much they pay.