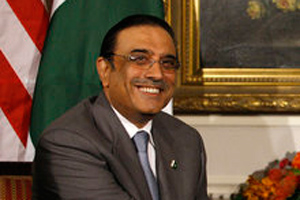 The Pakistani government’s response to the massive floods that have devastated the country isn’t getting the best reviews. Government food aid, medical supplies, and rescue services have been slow to reach affected areas, critics charge. At a press conference on Thursday, Pakistan President Asif Ali Zardari provided some clarification: he’s “not the government”, just “governance“—and “governance” doesn’t like it when people criticize the government. Cutting a vacation short to return to his flood-devastated country, Zardari struck out against “undemocratic forces [that] were maligning the government with their false propaganda about possibilities of corruption in [sic] utilisation of funds.” Such “allegations against the government . . . are malicious and baseless as always, aimed only at weakening the democracy.”

Zardari’s bizarre statement may be amusing, but reports that Islamist charities have been quick to fill the relief vacuum left by an absconding, slow-footed Pakistani government are no small matter. Regional expert Steve Coll considers how disasters expose what we know about a government, a country, and its most helpless:

A few days after an earthquake, you feel immediately the presence of the state—or its absence. People have reasonable expectations that their government or military or social or religious charities will scramble into action and make themselves felt after an earthquake. Where are the bulldozers? Where are the portable hospitals? Open those roads! If a government doesn’t perform, people can get agitated pretty quickly. Governments rise and fall over earthquakes. [emphasis added]

The point is simple, striking, and a terribly mean-sounding: disasters are opportunities for everyone. If Zardari can’t do what the Islamist charities can, he’ll continue to shed political capital. That’s exactly what seems to be happening, and no one seems particularly surprised.

In other words, Pakistanis are too often seen as a project, not a people. Their country is the perfect subject for almost any geo-political dissertation topic. That makes it hard for foreigners to respond to the floods as a human tragedy. Bad things happen in Pakistan because it’s Pakistan; from AQ to Zardari, it’s all catastrophe. We’ve come to expect Zardari to screw up, for the Islamist charities to swoop in, and for the American and Pakistani armies to wage a hearts-and-minds campaign because that’s just what happens over there.