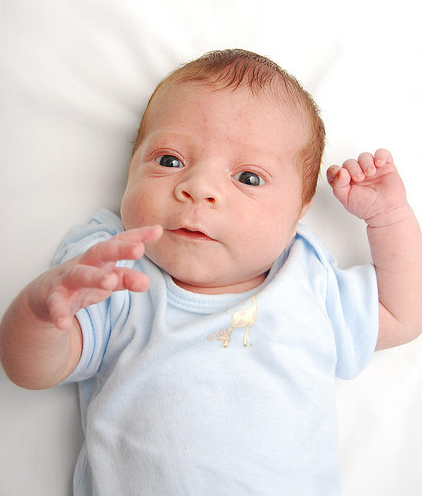 A new report from the Pew Hispanic Center shows that illegal immigrants are having children at a higher rate than the rest of the US population—a finding that some observers predict will help vindicate opponents of birthright citizenship. According to the Pew study, illegal immigrants make up about 4 percent of the US adult population but have children that represent about 8 percent of newborns. “These are significant numbers,” concludes Time‘s Kate Pickert. “[A]nd they seem to add an arrow to the quiver of those in Congress and elsewhere now suggesting the 14th Amendment of the Constitution should be changed.” The Pew study adds that Hispanics—who make up about three-fourths of the country’s illegal immigrant population—have a higher fertility rate than whites, blacks, or Asians.

Anti-immigration activists have worried about immigrant fertility for decades, and the right’s current crusade against immigrants who allegedly flock to the US to “drop a baby” is just the most recent incarnation of this long-running fixation. As I recently explained, such rhetoric is rooted in the fear that immigrants—particularly those who are unauthorized—are gaming the system to use up increasingly scarce resources, frequently at the taxpayers’ expense. It’s a Malthusian argument that has, at times, united unlikely allies to push back against overpopulation—especially given the environmental concerns about population growth that my colleague Julia Whitty described in depth earlier this year.

But there’s also a significant potential upside to higher fertility rates in the US: they could help bolster the US economy in the long term by creating a larger, younger, and healthier workforce. It wasn’t that long ago that some economists and demographers celebrated that the rate of fertility in the US was on the rise: in 2006, the US fertility rate hit its highest level since 1971, reaching the birthrate needed for a generation to replace itself, known as the “replacement rate.” At the time, a number of social scientists celebrated the development as a “milestone” for the country—specifically because higher fertility rates could help make the US economy more competitive than other industrialized nations with ageing populations and low birthrates, including much of Europe and Japan. A 2007 Washington Post story explains:

[T]he “replacement rate” is generally considered desirable by demographers and sociologists because it means a country is producing enough young people to replace and support aging workers without population growth being so high it taxes national resources.

“This is a noteworthy event,” said John Bongaarts of the Population Council, a New York-based think tank. “This is a sign of demographic health. Many countries would like to be at this level…A low birthrate results in an old society. It will be hard to support social systems when you have so few people relative to older people…the Europeans are very worried and are turning to all sorts of measures, including giving incentives to people to have children.”

While it’s unclear exactly which factors are most responsible for the jump in the US fertility rate, experts cite a growing Hispanic and immigrant population as among the likely causes. The story notes, moreover, that European countries that have been struggling with dropping fertility rates could have offset the losses by increasing immigration, but haven’t welcomed such a move in light of the anti-immigrant backlash that has tightened borders across the continent. By comparison, the US remains a relatively open receiving country for immigrants.

Even the Wall Street Journal‘s economics editor has described how a higher fertility rate is key to the US’ future prosperity. “Power equals numbers,” Dominique Strauss-Kahn, head of the International Monetary Fund, tells the Journal‘s David Wessel, in an analysis piece published today. The author goes on to explain why more immigrants and higher birth rate will actually help the US compete with countries like China further down the road:

And the U.S.? For all today’s gloom, it may be in the sweet spot. A growing population, an openness to ambitious immigrants and trade (if not disrupted by xenophobic politics) and strong productivity growth (if sustained) could lift living standards and bring faster growth, which would reduce big government budget deficits far easier for the U.S. than for slower growing Europe and Japan.

This doesn’t mean that unchecked immigration and population growth always prove to be an economic boon for industrialized nations, particularly those with a significantly developed welfare state. But basically, there’s a balance that needs to be struck in terms of weighing the economic costs and benefits of immigration. This is a policy debate that’s critical to the future of the US economy. So far, nativist sentiments and political shenanigans have precluded any kind of reasonable discussion.