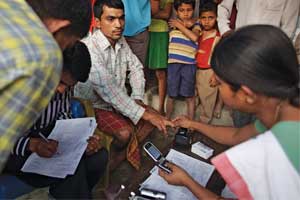 INSIDE HIS dusty electronics repair shop in west Delhi, Sonu Kumar aims a screwdriver at the innards of what looks like an unsalvageable transistor radio. Yet after a couple of turns, a Hindi dance tune pours forth. The customer hands Kumar two crumpled 100-rupee notes (worth about $4.39), which vanish into a shirt pocket. Until recently, those banknotes, like all of Kumar’s earnings, would have stayed in his pocket. Like many Indians, the 21-year-old repairman had never had a bank account. Making the trip to a bank branch, waiting in line when he could be out earning income, dealing with deposit minimums and other fees—banking in the conventional sense has always been out of reach for India’s poor.

But a quiet revolution in financial services is now underway, thanks in large part to an unlikely hero: cell phones. Across the street from Kumar’s shop is a cluttered drugstore, Sharma Medicos, where owner Lakhan Lal Sharma sells vitamins, shampoo, prepaid minutes for cell phones, and, as of last fall, mobile bank accounts managed by a startup called Eko. Kumar walks over to Sharma’s, places 1,000 rupees on the counter, and pulls out his phone. The store owner punches in a code, then Kumar’s phone number—which doubles as his bank account number—followed by a dollar amount and another code. A few seconds later, Kumar receives a text message from Eko confirming that his savings account with the State Bank of India has been credited 1,000 rupees. Sharma’s agent account has been debited the same amount.

Economists say giving poor people access to basic financial services would go a long way (PDF) toward reducing poverty in the developing world. Without a bank account, everyone you know—a perpetually drunk cousin, a hungry neighbor, your belligerent spouse—can steal your hard-earned money. Without a bank account, you may have to spend days riding buses and walking to deliver cash to a relative, or endure steep fees to wire money home. And although microfinance loans are helping millions of people, receiving or making payments on those loans is complicated when you have to do it in cash.

The problem is that there will never be many bank branches where poor people live, because there is no profit motive for banks to set up shop in slums. But cell phones are everywhere. There are now more than 4 billion mobile subscriptions worldwide, with 80 percent of new connections made by consumers in developing countries. In India, for example, 10 million new accounts open every month. “More than a billion people worldwide lack bank accounts, but do have mobile phones,” says Mark Pickens, an analyst with the Consultative Group to Assist the Poor, a development group at the World Bank. “That’s a dramatic opportunity for people who have no better option than to save cash under the mattress or ride hours on a bus to send money to loved ones.”

Indian kiosks already sell candy and cigarettes by the piece. Why not sell bank services the same way?

But it’s not just analysts who champion the marriage of phones and banks. Powerhouse nonprofits like the Bill and Melinda Gates Foundation, government agencies like the UK Department for International Development, and venture capital firms are all backing the technology. And while anti-poverty experts see mobile banking as a development godsend, the private sector sees a goldmine. “This is not about corporate social responsibility,” says Pallab Mitra, head of the mobile banking program at Bharti Airtel, India’s largest telecom provider. “We want to get paid.” But Mitra is also eager to see mobile banking accelerate India’s development. “Backward classes and all that shit has gone on too long,” he says. “Every man should be socially included. To do that, you need financial inclusion.”

India’s largest cell phone-banking startup, the one used by radio repairman Kumar and vendor Sharma, is Delhi-based Eko India Financial Services. On a recent visit to Delhi, I met its cofounder, Abhishek Sinha, who ditched a career with another startup to launch Eko three years ago. The mustachioed 33-year-old and I drove through the choked streets of Delhi to his home in the suburbs. Along the way, he pointed to tiny kiosks with signs for Vodafone, Aircel, and other network operators—all potential mobile bank account vendors. “Shops like that one,” he says, gesturing toward a store with a faded awning, “they sell cigarettes by the stick. And single pieces of candy.” The message: India’s economy is already built around minuscule transactions; banking could work the same way. “To define a bank branch in the old way is anachronistic,” says Gavin Krugel, director of the mobile money program at the GSM Association, the trade group representing the operators that run the networks. “We should be able to buy a bank account like we can buy chocolate.”

Eko is the liaison between the customer’s phone and a savings account with the State Bank of India, the largest in the country. At present, the bank doesn’t charge a fee to open these no-frills accounts, and requires no minimum balance. In fact, the bank does little besides hold deposits, pay out modest interest, and provide institutional credibility. Eko does the rest, managing accounts and coordinating with agents—storeowners like Sharma who are handling the cash and interacting with customers. Eko also has an agreement with Bharti Airtel to use its vast network for sending data, in exchange for a tiny commission on each and every transaction. Airtel’s incentive is potential profit if mobile banking goes huge, but there’s also bolstered customer loyalty; people may be less likely to jump to a different carrier if their bank accounts are tied to mobile subscriptions. For the State Bank of India, the main motivation is corralling new customers who could be more lucrative in the future. Perhaps someday, banks will require a small charge for mobile transactions, or maybe new mobile customers will want other financial services, like loans, CDs, or mortgages.

The private- and public-sector push suggests it is only a matter of time before mobile banking takes off. In 2008, Bill Gates paid a surprise visit to Eko’s offices, going out to a drugstore in the bustling neighborhood of Uttam Nagar, where he opened his own phone-enabled account. Shortly after, the Gates Foundation announced a $12.5 million grant to support mobile banking initiatives in Asia, Africa, and Latin America. So far, 120 such programs have launched in developing countries.

Mobile banking has already been successful in countries such as Kenya, where Vodafone’s branchless banking service, called M-Pesa, has more than 8 million open accounts. But for the concept to really prove its worth, it will have to work in India. Despite its booming economic growth, India is home to roughly one-third of the world’s poor, and 61 percent of rural Indians did not have bank accounts in 2007. Eko is still relatively small, with projects around Delhi and in four rural areas of the state of Bihar. After 15 months of operation, more than 30,000 accounts are active.

Other obstacles persist. Can you ensure that agents don’t open accounts for money launderers or terrorists? And some worry about customer exploitation in the form of little fees—charged by the platform providers like Eko, stores, banks, and even the government. But choice and competition are the best remedies for exploitation, says Ignacio Mas, deputy director of Financial Services for the Poor at the Gates Foundation. “Today, poor people don’t have many choices, which is why they often find themselves in the hands of varyingly scrupulous local moneylenders, or opt to just hide their cash,” he says.

The benefits of such services are already clear to Eko customers like Kumar. His family lives in the city of Meerut, four hours by bus from Delhi. He makes the trip about once a month, bringing cash to his relatives when he can afford to; last time he delivered 12,000 rupees (roughly $264). If Eko or some other branchless banking project truly takes off, Kumar will be able to send funds to his family much like he sends text messages. His relatives, in turn, will go to a shop in Meerut and either redeem the cash or make purchases electronically. Kumar, meanwhile, will be able to save a bunch of time. And money.