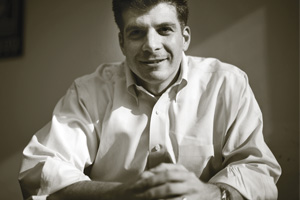 The office might be that of a regional sales director for a midsize company—a modest space, adorned by little more than family photos, a “Fightin’ Phillies” banner, and a shelf of binders bearing labels like “Northeast” and “Midwest.” Four blocks from the Capitol, it has a view not of Washington’s grand buildings, but of an elevated highway. Yet this room is the command center for a titanic fight that could determine the future of the nation. It’s the office of Jon Vogel, the man tasked with one of the toughest jobs in politics: stopping what appears to be a tidal wave heading toward Congress.

Vogel, 35, is the executive director of the Democratic Congressional Campaign Committee, a.k.a. “D-Trip” (even “D-Triple C” is now passé), the party unit in charge of raising money and providing other support for House races. It’s a tall order: Since Abraham Lincoln, the party of a first-term president has always lost House seats in the midterm election, with two exceptions—the year after FDR was inaugurated during the Great Depression, and the year after 9/11. If the pattern holds true this year, Republicans might ride popular discontent, Tea Party anger, and sky-high unemployment to regain control of the House. Vogel’s job is to stop that from happening.

The public face of the D-Trip is Rep. Chris Van Hollen (D-Md.), an ebullient congressman from the DC suburbs. Vogel stays behind the scenes running the operations: fundraising, candidate recruitment, message development, media strategies. (His counterpart is Guy Harrison, the 38-year-old tobacco-chewing executive director of the National Republican Congressional Committee.)

Vogel has been a professional Democrat for most of his adult life. He grew up in the Philadelphia suburbs, the son of a professor and a psychologist. In college, he interned for Sen. Daniel Patrick Moynihan (D-N.Y.) and ran his own car-detailing business before taking a job with the DCCC’s fundraising department.

Vogel’s early campaigns were tough—in one of them, he worked for Michael Forbes, a Long Island congressman who in 1999 bolted the Republican Party. To help Forbes get over his negatives with Democrats—he’d voted for Bill Clinton’s impeachment—Vogel organized a Manhattan fundraiser where Clinton told a roomful of donors that if he could forgive Forbes, so could they. Forbes lost the primary by just 35 votes, but Vogel went on to raise money for Rep. Steve Israel (D-N.Y.) and worked for him on the Hill. He returned to the DCCC under Rahm Emanuel for the 2006 campaign cycle.

Asked if he has any tales to tell about working with Emanuel, a time he calls “extremely stressful and extremely rewarding,” Vogel quips, “There are so many horrible ones—but I’m not trying to share.” Actually, Vogel got on well with Emanuel, says John Lapp, who ran the DCCC’s independent expenditures program, because Vogel “knows how to hustle and how to take a punch.” The key lesson he learned from Emanuel, Vogel recalls, is that “it is better to make a mistake of commission than omission. Always move the ball down the field.”

“Jon was tenacious and annoying,” recalls Brian Wolff, then Emanuel’s deputy. “He fought for his candidates like I’ve never seen…Is he fun? No. But he’s focused. He’s not someone to shoot the shit with.” One word that often comes up when past colleagues describe Vogel is “intense.” (Outside politics, Vogel’s passions include rooting for the Philadelphia Eagles and 5:45 a.m. workouts.)

In 2006, Vogel’s tenacity paid off when the Democrats picked up 30 House seats and regained the majority they had lost to Newt Gingrich in 1994. Thirteen of those seats were in the regions Vogel was responsible for—the Northeast and Florida—and they included races that hadn’t even been “on the map,” according to Lapp. Vogel had helped Emanuel practically eradicate an endangered species: the Northeastern Republican moderate. He repeated his success in the next cycle when, first as the D-Trip’s political director and then as head of its independent expenditure program, he helped the Dems add 24 seats to their House majority. Afterward, he left the DCCC to become a partner at Global Strategy Group, a research and marketing firm that advises corporations, politicians, and advocacy groups. (Its long list of clients has included Goldman Sachs, John Edwards, Charlie Rangel, Andrew Cuomo, the American Cancer Society, and the Akron Zoo.)

But a few months later, Brian Wolff resigned as executive director of the DCCC, and Van Hollen asked Vogel to take his place. Usually, Wolff notes, high-level operatives don’t return to political jobs from the private sector, where the pay is much better and the work is less consuming. Besides, Vogel’s wife had just given birth to their first child. But he couldn’t say no. “I have a lot invested in this,” he says. “It’s part personal.”

The problem Vogel now faces is of his own making. The Democrats did so well in the past two cycles that they elected candidates in areas that aren’t blue territory. Van Hollen points out that 80 current House Democrats hail from districts that went for George W. Bush in 2004. Vogel has identified 41 “front line” incumbents to worry about, including Reps. Alan Grayson of Florida, Tom Perriello of Virginia, and Steve Kagen of Wisconsin. (The NRCC has named just 25 GOP House members in its “Patriot” program for at-risk incumbents.) And close to 20 Democrats are vacating their seats, several in districts favorable to Republicans.

The specter of 1994 hovers over Democrats. In that blowout, the Dems lost 54 seats and forfeited control of the House after being in the majority for four decades. To win the House this year, the GOP must be able to “play” in some 80 competitive seats and win about 60, something Vogel doesn’t think it has the money to do. Early indicators, though, suggest voters are in a “throw the bums out” mood. It may not be an entirely partisan impulse, but as the incumbent party, the Dems are most at risk.

Veteran political handicapper Charlie Cook notes that Vogel is contending with “horrific circumstances…He’s like a team that’s been helicoptered onto the Titanic after the iceberg hit. ‘Who can we save? What can we teach these guys to save themselves?'” Cook maintains that a race-by-race analysis shows the GOP is poised to gain at least 30 seats, even if this does not turn out to be a “wave” election like 1994: “Something will have to change the trajectory of the election for the Democrats to keep their majority.”

How can Vogel pull off a dramatic rescue? “In the face of a wave,” Van Hollen says, “you make it a district-by-district battle.” In other words, Vogel need not hold back the entire ocean; he must only win in a few dozen key districts. And he’s gotten off to an early start. At the end of the first quarter of 2010, the DCCC, having seen a surge in donations after health care reform passed, had $26 million cash on hand to the NRCC’s $10 million. By early May, the DCCC had field directors working for campaigns in 32 congressional districts—in previous cycles, the D-Trip’s operatives didn’t hit the ground until summer. Vogel is also using pricey “microtargeting” research—data mining, previously deployed only in presidential and Senate campaigns—to identify likely voters and their issues.

On the message front, says Vogel—who notes that Emanuel taught him to articulate the core narrative of an election in a sentence or two—the story of 2010 boils down to something like this: The Democrats are looking out for the middle class, and the Republicans are looking out for corporations. At least one poll suggests this could be a difficult talking point to drive home; asked if the Dems care more about average Americans than corporate interests, only 35 percent of respondents said regular folks, while 53 percent said the party favored corporations. But in May, the Dems won a special House election in Pennsylvania after depicting the GOP candidate as too close to big business.

To match his defensive game with a sound offense, Vogel is looking to run solid Democratic candidates in two dozen or so GOP districts to force the NRCC to protect its turf. He’s particularly pleased he was able to persuade Bethlehem Mayor John Callahan to challenge Rep. Charlie Dent (R-Pa.). Vogel has also placed Tea Party darling Rep. Michele Bachmann (R-Minn.) on his “red to blue” hit list. He says voters could be persuaded that she focuses too much “on her national politics and [not] the needs of her local district.”

Still, it’s a mighty uphill struggle. A Gallup poll in April found that American voters were split when asked if they would vote for a Republican or Democratic House candidate in November. But among “very enthusiastic” voters, 57 percent said they’d choose a Republican, while only 37 percent picked a Democrat. Polls like that are warning signs. Turnout usually drops in off-year elections, especially among young and minority voters—likely Democrats—and an angry mob can have more influence.

“We need to raise the stakes” for Democratic base voters, concedes Vogel, who is in daily contact with the White House. After the passage of the health care bill, Vogel notes, party activists were energized. The challenge now is to remind both loyalists and independent voters “that the Republicans have stood in the way.”

The next months will be arduous for Vogel, who in May was already working more than 12 hours a day. As the election draws near, Wolff notes, Vogel will be faced with “horribly crucial decisions”—pulling out of some races he’s worked hard on so the party can target its money elsewhere. “When you’re playing this much defense, you’ll have to cut some members loose.” Is Wolff glad not to be in Vogel’s position? “Hell, yes!” he says. “I feel sorry for him.” Vogel, for his part, insists that he considers himself lucky—even though “I may lose sleep at night.”