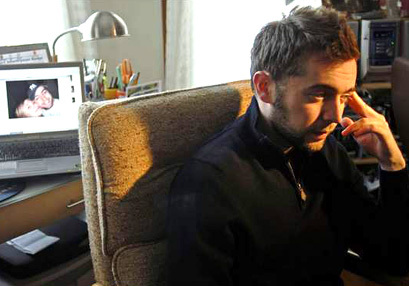 …Aaaaand we have revenge. The military today announced that Mike Hastings, the Rolling Stone freelancer and longtime war reporter who ended Gen. Stanley McChrystal’s career by, um, listening to stuff that happened and writing it down, will not be returning to Afghanistan anytime soon. His request for a September frontline embed, which had been previously approved, was suddenly rescinded by the unit’s commander, according to a DOD spokesman, Colonel David Lapan:

“There is no right to embed,” Lapan said. “It is a choice made between units and individual reporters, and a key element of an embed is having trust that the individuals are going to abide by the ground rules. So in that instance the command in Afghanistan decided there wasn’t the trust requisite and denied this request.”

Now, the military could have maybe welcomed Hastings to show they could let bygones be bygones…as well as to do some pushback against the WikiLeaks crowd by inviting a real, live reporter with a camera and junk out there to cover the “ground truth” by being, you know, on the ground. You’d think Bill Caldwell, the ISAF training commander who once ran the coalition’s public affairs machine in Iraq, would know that.

Is the military’s explanation kosher? Not likely; the reasons why after the jump.

Is this merely a matter of some junior field commander declining to let Hastings come along for reasons more related to security than vengeance? Probably not; if a commander rejects an embedded reporter, senior military staff can always lean on the commander to take him back or, at very worst, offer the reporter another embed elsewhere in the theater. The Afghan brass did neither.

In fact, Hastings seems to imply he was booted because he refused to cooperate with a military investigation: Authorities are looking into the soldiers he’d interviewed for the Rolling Stone piece to determine if their comments violated regulations. “for the record, i declined to be interviewed and refused to participate in the army’s IG investigation,” he tweeted out to followers late Tuesday night.

Plus, there’s a disturbing precedent for Hastings’ treatment. Last year, US commanders in Iraq kicked Heath Druzin, a Stars & Stripes reporter, off an embed, ostensibly because he was a distraction to his host unit. But then an Army PR officer made the mistake of complaining in writing that Druzin’s reporting wasn’t sunny enough. “Despite the opportunity to visit areas of the city where Iraqi Army leaders, soldiers, national police and Iraqi police displayed commitment to partnership, Mr. Druzin refused to highlight any of this news,” she wrote to Druzin’s editorial director. Stripes then pulled out all the stops, calling the military’s move “an attempt at censorship and…also an illegal prior restraint under federal law.”

Incidentally, I was in the Baghdad public affairs shop when Druzin’s case came up, and I made an appeal on his behalf to one of the unit’s senior officers. Whatever his transgressions, I told this Army major, it had to be in the military’s best interest not to appear arbitrary or heavyhanded when handling civilian reporters. Besides, if the military was really angry about Druzin’s stories, didn’t they realize that kicking him off an embed simply gave those stories a ton more attention from the domestic public and his press colleagues?

In response, the major told me only one thing. “They’ve got to understand,” he said, “that embedding is a privilege and not a right.”

You can say this for the military: They know how to stay on message.