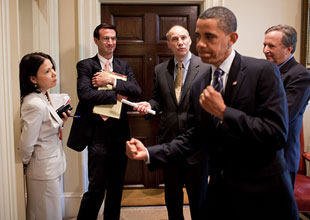 The Dodd-Frank Wall Street reform bill is now the law of the land. It’s hard to know if it can prevent the next financial meltdown. Yet for most families, a better question is whether the law is strong enough to remake the financial services marketplace.

In recent years, too-easy credit indebted much of the middle class, subprime loans were peddled without concern for a borrower’s ability to repay, and expensive check cashers and payday lenders became more ubiquitous than the corner saloon. This fringe financial sector not only destabilized family balance sheets, it undermined the larger economy as a whole. Thanks to the new law, for the first time, there will be a single agency—the Consumer Financial Protection Bureau—focused on protecting consumers, shutting down the latest scams and gimmicks, and making sure families can access appropriate and affordable financial services.

But much depends on the strength of this new agency. A weak agency will send the signal that with a few adjustments (maybe redesigned “disclosure statements”), business can proceed as usual. But a strong agency that is ready to flex its regulatory powers can stamp out the worst predatory lending and transform the market in meaningful ways.

No wonder, then, that there’s intense interest in whom President Barack Obama will tap to lead this bureau—and whether the president will back them up in a showdown.

Consumer and other progressive groups have proclaimed Harvard law professor Elizabeth Warren, who heads the Congressional Oversight Panel that’s been monitoring the TARP bailout, the only person for this post. They have organized petitions and endorsement statements on her behalf. After all, in 2007, she originated the idea of creating a consumer financial protection agency. In the past year and a half, she has led a series of public tutorials on how our financial system skidded off the tracks, screwing average Americans. Check out her appearances on the Daily Show (or her various congressional appearances) to hear her explain in plain language how the proliferation of complex, unfair, and predatory financial products have driven trust and integrity from the marketplace. To her credit, Warren recognizes that job one will be reversing this trend. As a high profile figure during the financial-reform bill debates, she repeatedly emphasized that trust can only be restored if consumers are provided access to appropriate savings and credit products in a fair and transparent manner.

Usually, the confirmation process for financial regulators is a below-the-radar affair—nothing like, say, a Supreme Court nomination. Not this time. The GOP seems eager to head into the campaign season running on a platform of repealing the Wall Street reform bill. Mostly likely, they will be ginned up to oppose any nominee. While some in the White House may calculate that passing over Warren for another qualified candidate may avoid a contentious and distracting spectacle, the reality is that whoever gets the nod is heading into a storm.

Yet this is a fight the president ought to embrace.

A battle against congressional antagonists and an array of financial firms can readily be turned into political advantage. By creating a clear contrast in which Obama and the Democrats line up on the side of families facing off against financiers, the president can embolden his political supporters and rally the base before the fall elections.

Perhaps more consequentially, a high-profile confirmation battle can serve vital policy goals. This is because effective government oversight requires competence and vigilance, but the essential—often overlooked—ingredient is empowerment. Regulatory agencies have to resist forming cozy relationships. At many turns, regulatory law opts for discretion rather than dictates. This means an agency can turn up the heat or turn it down with a large degree of autonomy. History shows that it takes a large dose of political will for an agency and its officials to resist the dangerous phenomenon of regulatory capture. There may be no better way to demonstrate resolve than by commencing the inevitable battle at the get-go, during the confirmation process.

Besides Warren, there are other highly capable contenders for the job: mainly, Michael Barr, the assistant secretary for financial institutions at Treasury, and Justice Department official Gene Kimmelman, a longtime consumer advocate in Washington. Barr, for his part, has long focused on expanding access to responsible financial services, particularly among lower-income families, and he worked hard to create the new consumer agency, drafting much of the legislative language. He worked the inside game when Warren was often the public face.

But the same interest groups will line up against any nominee. And if that’s the case, the show ought to begin with a star. Warren’s visibility and public credibility certainly can be tremendous assets in such a clash. She’s a highly effective communicator and has received high marks in running the Congressional Oversight Panel (which should mitigate some of the whispers that she doesn’t have sufficient management experience). She will garner the full throated endorsements of many ready to back her up during the confirmation battle

Winning this showdown is crucial for getting the policy reform process underway. Whoever is nominated, he or she should be expected to explain clearly how the law establishes a new accountability framework and be prepared to fight in the regulatory trenches to implement it. Exerting authority right out of the gate will make it easier for the new agency to play tough. Issuing cease-and-desist orders, filing lawsuits, and seeking damages should become commonplace and signal that there will be no tolerance for the marketing of financial products deemed unfair or deceptive. A high-profile confirmation battle—supported and waged by the White House—will not only be a clear demonstration there’s a new cop on the beat, but that the Obama administration is ready and willing to do what it takes to put the financial pirates out of business for good.