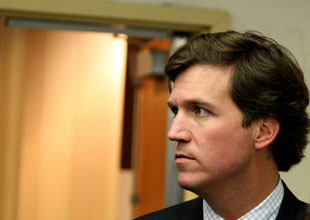 To explain the Daily Caller‘s much-discussed and much-debated series that revealed private emails from JournoList, the now-defunct listserv for liberal journalists, academics, and policy wonks, Tucker Carlson, the conservative website’s ever-feisty editor, published an open letter. Referring to the “exposed members” of JournoList, he gleefully boasted, “We caught them. They’re ashamed.” It’s true that some of the J-Listers had been nabbed sharing intemperate comments or a bad idea or two that usually went nowhere. But with a fair amount of indignation, Carlson declared that the primary sin of the JournoListers was partisanship:

To be clear: We’re not contesting the right of anyone, journalist or not, to have political opinions. (I, for one, have made a pretty good living expressing mine.) What we object to is partisanship, which is by its nature dishonest, a species of intellectual corruption. Again and again, we discovered members of Journolist working to coordinate talking points on behalf of Democratic politicians, principally Barack Obama. That is not journalism, and those who engage in it are not journalists. They should stop pretending to be. The news organizations they work for should stop pretending, too.

Is partisanship always and truly “dishonest” by its nature? Whether or not that’s the case, would it be wrong by Carlson’s standards for a journalist to help a partisan group raise money for its partisan activists? I ask because a few days ago I stumbled upon a website for a Republican outfit featuring Carlson as its special guest for its annual fundraiser.

The Log Cabin Republicans organization is promoting Carlson as the big-name draw for its “national dinner” on September 22 at the Capitol Hill Club. Log Cabin Republicans are “loyal Republicans” (its website says) who support gay rights. Other “confirmed participants”—who receive billing beneath Carlson—include Senator John Cornyn (R-Texas), conservative strategist Grover Norquist, and several House Republicans. Tickets for the dinner are $150 ($175 for the dinner plus a “Liberty Education Forum Symposium” with the early registration discount). A table can be bought for $10,000, and that comes with a private reception with “keynote speakers.” The full name of the venue where the event is being held: the National Republican Club of Capitol Hill.

The conventional definition of “partisan” is supporting a party. And though the Log Cabin Republicans have something of a moderate image—as in, we’re-not-extremist-Republicans—it is definitely a partisan entity. It endorses federal and state candidates—Republican ones only. The group backed John McCain in the 2008 general election—after running an ad depicting Mitt Romney as a flip-flopper during the Republican primary campaign. This outfit has an affiliated political action committee that contributes to Republican candidates.

Carlson is hardly averse to journalists participating in political events. In 2008, he emceed a rally for GOP Rep. Ron Paul. This past April, he was a speaker at a tea party anti-tax day rally in Washington. These actions may not be technically partisan. But does Carlson’s involvement with a pro-GOP group suggest he’s participating in a form of “intellectual corruption,” per his open letter?

Curious about where the lines are on Planet Carlson, I sent Carlson (whom I’ve always enjoyed debating) a polite email inquiring if he might be violating his own thou-shall-not-be-partisan rule for journalists? He replied puckishly:

With all respect, this is stupid and wrong. In order:

This is not as far as I know a fundraiser. The Log Cabin guys asked me to speak at their annual convention. I accepted. They are not paying me. My presence does not suggest I endorse their platform—some of which I’m sure I disagree with—much less specific candidates. They have no control over what I say in my speech.

Several years ago, I addressed the annual ACLU convention in Washington, as well as the Human Rights Campaign, both partisan organizations. I didn’t take a dime from either one. It goes without saying that I didn’t endorse their platforms either. I said what I think is true, as I always do, and as I plan to in September at this event.

There’s no doubt you could fairly easily find examples of me saying stupid or reckless things in public. But you will never find me sucking up to or carrying water for a politician or political party, because I never have.

In the conventional sense, the ACLU and the Human Rights Campaign are not partisan groups—ideological, yes, but not partisan, given that they do not support one party over another. And Carlson was rather praiseful of Ron Paul at a rally for his benefit. (You can watch for yourself and decide if that counts as sucking up.) But the Log Cabin Republicans event for which Carlson is the marquee name is indeed a fundraiser. Whether Carlson realizes it or not, he’s helping this Republican group raise money for its efforts. Is this too partisan an action for an independent journalist? It might be, particularly if that journalist is a purist who questions the purity of others. At the least, a journalist who engages in such activity ought to be aware of exactly how he is being used.

(Interest declared: I was a member of JournoList who mostly lurked; several years ago, I used the listserv infrequently to promote articles I had written.) 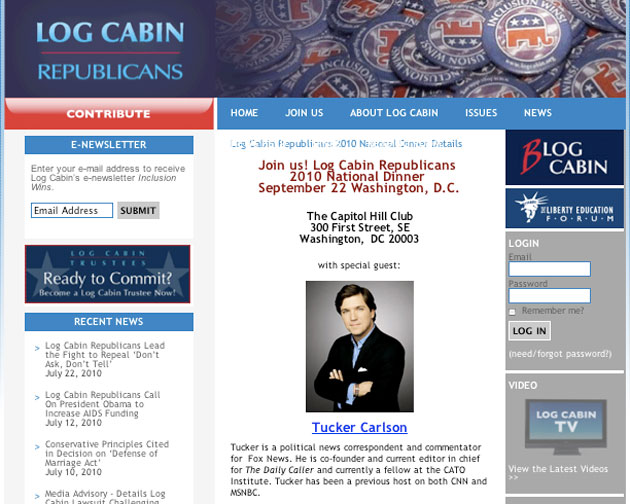