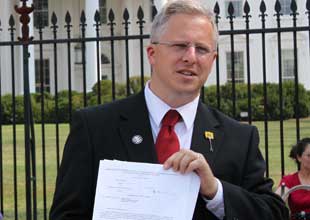 Van Irion, a GOP congressional candidate from Tennessee, is walking through the Hart Senate Office Building on Capitol Hill, in search of Sen. Harry Reid’s office. “Wow,” he says, passing the 75-foot Alexander Calder sculpture, Mountains and Clouds, that dominates the lobby. “That looks like a big piece of taxpayer money.” Notwithstanding that the sculpture was actually donated, Irion is a fiscal conservative if there ever was one. Endorsed by none other than Rep. Ron Paul (R-Texas), Irion is a serious tea party candidate in a crowded primary field of aspirants looking to fill a seat vacated by GOP Rep. Zach Wamp, who is running for governor. He first distinguished himself from the 11-candidate field by campaigning with a pitchfork on which he had impaled a “Don’t Tread on Me” poster.

He didn’t bring the pitchfork today, recognizing that it might have presented a bit of a problem with security. So instead, he has a replica of the pitchfork/poster combo pinned to his lapel. He has flown in from Tennessee on a plane piloted by a doctor/supporter so that he can serve Senate Majority Leader Reid, House Speaker Nancy Pelosi, and other Obama administration officials with a copy of the class action he recently filed in federal court. Like many small-government conservatives, Irion hopes to overturn the recently passed health care reform bill. But his lawsuit goes beyond simply challenging the legislation.

Irion is a “tenther,” someone who has pledged fealty to the Tenth Amendment of the Constitution—a small but powerful sentence that supporters say vests the states and individuals, not the federal government, with any powers that aren’t specifically spelled out in the Constitution. Irion sees the amendment as a strict constraint on federal power—and one entirely disregarded by Congress and the Supreme Court over the past few decades. As such, he hopes that his class action, which more than 30,000 Americans have joined as plaintiffs, will not just kill off “Obamacare” but drive a stake into the heart of the jurisprudence that has allowed Congress to subvert states’ rights in the name of regulating interstate commerce.

Irion didn’t actually need to come to DC to file his lawsuit—he could serve all of the defendants through certified mail—but as he says of the trip, “It’s fun, though, isn’t it?” Accompanied by an entourage that includes his doctor/pilot friend, his wife Dawn, and his campaign manager—the Tennessee tea party organizer Tony Shreeve—Irion has just dropped the 341-page document on the desk of a Pelosi staffer. Next up: Reid’s office.

The DC process-serving expedition is slightly disorganized. One of Irion’s campaign volunteers, Gregg Juster, even asked me how to get to Reid’s office. Initially unaware that people can’t just waltz into Reid’s suite in the Capitol without an appointment, Irion settles on serving Reid’s district office in the Hart building instead. Irion approaches the first desk inside the door and delivers his spiel and an envelope containing the lawsuit. He has just served Reid’s summer intern. No matter. “Served!” he says, triumphantly.

I ask the intern, Ben Symons, whether this is the first lawsuit he’s been served with this summer. “No comment,” he responds. And when I try to double-check his name, he says, “You can stop talking to me now. And that’s off the record.” Needless to say, the merry band of Tennessee tea partiers left unimpressed with the majority leader they were already inclined to dislike.

In the hallway outside Reid’s office, I ask Irion, a patent lawyer, whether he actually has standing to bring this lawsuit. Obamacare, as he calls it, hasn’t harmed him, at least not yet, and that’s usually a requirement for such suits—especially these days, when the Supreme Court has taken a dim view of these kind of preemptory challenges. Irion insists that he does. “Individual citizens have more standing than the states because the states don’t have any individual mandate,” he says. “Because of that, our lawsuit is really unique.”

Irion was inspired to bring the suit after Tennessee’s attorney general refused to represent the state in a lawsuit challenging health care reform the way Ken Cuccinelli has in Virginia. Irion also finds the lawsuits filed by Virginia, Florida, and other states lacking, because they don’t get at the constitutional issues that he thinks have been a problem ever since the 1942 Supreme Court decision against Ohio farmer Roscoe Filburn. In that case, the court sided with the federal government, which had ordered Filburn to destroy some of his crops and pay a fine because he grew some extra wheat to feed his own chickens—a violation of federal wheat production limits that had been imposed to help raise prices during the Great Depression.

Even though Filburn was using the wheat for his own use and had no intention of selling it, the court said the government was acting within its right to regulate interstate commerce. The decision, much hated by Tenthers, has endured; in Irion’s view, it’s paved the way for a vast and unconstitutional expansion of federal power into everything from health care to gun laws. He hopes the Supreme Court eventually finds in his lawsuit the basis to drive a pitchfork through Filburn and to restore some reasonable limits to federal power.

Pitchfork aside, Irion is an earnest guy. He is such a firm believer in term limits—and is so disillusioned by politicians who have violated their promises to adhere to them—that he has signed a bonded term-limit agreement. Under it he will have to pay the Anderson County, Tennessee, volunteer fire department a million bucks if he files for a fourth term.

First, though, he has to get elected.

The GOP primary is on Thursday, and Irion’s staff estimates that he has a good shot at being in the top three, maybe four, though recent polls show him garnering only 3 percent of the vote. But his staff is devoted. Juster, a cigar-chomping silver haired businessman who essentially quit working to volunteer full-time for Irion’s campaign is a true believer: “The difference between Van Irion’s message and the other Republicans in our race is that their message is just against Obama, against Pelosi, against spending. It’s no message. Van’s message [about the Constitution] resonates regardless of who’s in power.”

Meanwhile, Irion walks the halls of Congress with a purpose, even if he has no idea where he’s going. At one point, as the group is trying to hook up with Juster, who is the designated driver, they get so turned around that Dawn laughs, “We’re not Washington insiders, are we?” To which someone else mutters, “Thank God.”

Finally free of the Hart building, the group moves on to visit the office of Attorney General Eric Holder. Outside the Department of Justice, Irion points out the words carved on the building: “No free government can survive that is not based on the supremacy of law.” He suggests DOJ employees “need to come out here and read their own building.” As it is, he can’t get those people to give him the time of day. DOJ staffers leave him cooling his heels in the lobby for half an hour waiting for someone from the mailroom to retrieve his complaint.

Undaunted, Irion finally hands his complaint to Roosevelt from the mailroom and moves on in search of the White House mailroom, which is rumored to be at 1800 G Street NW. When he arrives, though, the security guard at the building has no idea what he’s talking about, so Irion decides to head directly for 1600 Pennsylvania Ave., under the notion that service can be achieved at a “residence or office.” On this brutally hot afternoon, he approaches some Secret Service agents outside the White House. They immediately shut down his friends who are trying to video the incident and tell him they can’t take his complaint. It looks like Irion will have to serve Obama by mail, after all.