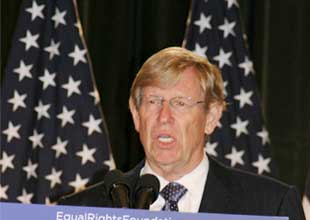 READ ALSO: MoJo’s Josh Harkinson on San Francisco’s family night and Celia Perry on why she’s been waiting for this ruling since the third grade. Plus: Does Judge Walker’s personal life matter?

In a jubilant and emotional press conference this afternoon in downtown San Francisco, the same-sex couples who sued to overturn California’s constitutional ban on gay marriage said their victory affirmed America’s most fundamental values. “I was raised to believe in the American Dream, that if you worked hard and played by the rules, everyone got an equal shot,” said Jeff Zarillo, who lives with his partner in Burbank, California. “Well today, nowhere is that American Dream more real than in the state of California.” A few moments later, he was overcome with tears.

Zarillo’s partner, fitness expert Paul Katami, kissed him amid a supernova of camera flashes before taking his place at the podium. “Thank you, Jeff, for setting me up for a cryfest,” he told a room full of chuckling reporters. “I’m already labeled the emotional one, so why not continue that? Today is a very good day.”

Minutes earlier, news that that a federal court had overturned Proposition 8, the state’s same-sex marriage ban, had reached the handful of activists in the room via email and text message. “He’s overturned it!” shouted Gloria Nieto, a gay-rights blogger who was clutching an iPhone. She embraced Alice Hoagland, whose gay son, Mark Bingham, had died on 9/11 aboard Flight 93 while traveling to the San Francisco wedding of a Muslim fraternity brother. “I’ve embraced the cause of the LGBT community,” Hoagland told me, “and this is a momentous day. It’s a much-needed boost for us and just a delight.”

Speaking before a wall of American flags strewn between the staid Greek columns of the Bentley Memorial Building, gay-rights advocates praised the ruling. “It embraced the fundamental values of freedom and fairness,” said Chad Griffin, the board president of the American Foundation for Equal Rights, which underwrote the case. “Today’s decision affirms that under the Constitution, a government of the people, by the people, and for the people cannot discriminate against the people.”

Joining the victors were David Boies and Theodore Olson, attorneys who’d famously sparred during the Bush v. Gore Supreme Court case that decided the 2000 election. They’d put aside their differences to try the Prop 8 challenge. Olson, who served as George W. Bush’s solicitor general, called the ruling “a victory for the American people.” Asked by a reporter if he thought the Supreme Court would uphold the ruling, Boies added, “Ted and I have a deal: He’s going to get the five justices who voted for him in Bush v. Gore and I’m going to get the four justices who voted for me in Bush v. Gore.”

Turning serious, he argued that the legal arguments in favor of gay marriage were overwhelming. Even many of Prop 8 supporters’ expert witnesses had been forced to concede that marriage is a fundamental right, depriving gays of that right harms them, and granting them that right doesn’t hurt heterosexuals. “It’s very clear,” Boies said, “and we believe that will be upheld by the Ninth Circuit Court of Appeals and by the US Supreme Court.”

For now, at least, the ruling by federal judge Vaughn Walker is the undisputed law of the land. A reporter asked Paul Katami if he and Zarillo planned to rush out and get married today. That might be a bit too soon, Katami said. “I need time to order cake.”