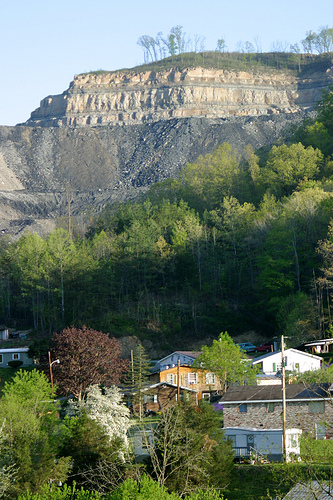 After nearly wrecking the global economy, pocketing trillion-dollar bailouts, and now profiting handsomely while the American economy sputters, it’s hard to muster any praise at all for the titans of Wall Street. Some recent developments on the Street, though, do deserve plaudits, however tempered: Over the past two years, many of the world’s biggest banks have limited or severed ties with one of the world’s most environmentally destructive practices, mountaintop removal mining.

Concentrated in the Appalachian region, MTR mining involves blasting the peaks off mountains to expose the black veins of coal underneath. But the byproduct of MTR is tons of rubble and waste from the demolition that eventually quickly finds its way into nearby rivers, streams, and other water sources, severely contaminating them. As a result, local wildlife is killed off and nearby communities suffer prolonged health issues. And as scientist Margaret Palmer at the University of Maryland’s Center for Environmental Science has testified (pdf), there’s really no way to mitigate the effects of MTR. For years, the coal companies practicing MTR mining operated thanks to billions in loans from the world’s biggest banks, who arranged funding deals to facilitate MTR projects.

But as the Rainforest Action Network (RAN), one of the most active organizations pressuring banks to stop funding MTR, noted on Wednesday, a who’s-who of Wall Street firms—Bank of America, Citigroup, Wells Fargo, Credit Suisse, and Morgan Stanley—have passed company policies cutting ties or minimizing their connections with MTR-tied coal companies, like Massey Energy, a major player in the MTR business. Not long after Mother Jones reported in March on megabank JPMorgan Chase’s support for MTR—it has helped to underwrite nearly 20 bond or loan deals worth $8.5 trillion; one activist called Chase “the largest remaining player in this game”—the bank announced it planned to further review its MTR financing practices. (And Chase pointed out that it did not finance a single company with a major stake in MTR mining in 2009.)

Wall Street’s growing reluctance to finance MTR-practicing companies has hit Massey, as close as you can get to a household name in the coal industry, especially hard. Massey was the company at fault for the Upper Big Branch mine catastrophe in April, in which 29 miners were killed. Now, most of Massey’s financiers have cut ties with the company as Wall Street has soured on MTR. “Money talks—and it is saying loud and clear that mountaintop removal coal mining is a bad investment,” says RAN executive director Rebecca Tarbotton. Here’s RAN on Wall Street’s rebuke of Massey:

As examples: Based on Bloomberg data, Bank of America, which was one of the ‘syndication agents’ on a $175 million revolver loan to Massey in March 2008, is no longer on the deal or any others with the company. JPMorgan, similarly, underwrote $180 million in debt securities in 2008 to Massey and was also the lead manager on a $233 million share deal (joint with UBS) that same year. JPMorgan no longer has any financial ties to the company.

“With the move away from mountaintop removal coal mining, our country’s top banks are showing that they know they can do well while doing good for our environment and our public health,” Tarbotton adds.

Not all banks have followed the lead of Chase and Credit Suisse and Bank of America. Currently, the majority of MTR financing comes from the secretive Swiss bank UBS and Pittsburgh-based PNC Bank. RAN says it plans to focus in particular on pressuring UBS and PNC to change their MTR policies. And even though the six banks mentioned above have implemented mining policies, that doesn’t mean they can rest easy. In a May report (pdf), RAN graded the big banks on their MTR policies, handing “C”s to Bank of America and Morgan Stanley and “C-” to Citigroup. What RAN wants is a “clear exclusion policy” on lending to MTR-practicing companies adopted by all banks.

Looking at MTR financing figures, available here courtesy of the financial watchdog group BankTrack, it’s evident that Wall Street’s move away from MTR could seriously wound the industry. MTR currently accounts for approximately 7 percent of US coal mining, though that figure could decline if more banks announce MTR policies. Says RAN’s Tarbotten, “Bottom-line, as access to capital becomes more constrained it will be harder for mining companies to finance the blowing up of America’s mountains.”