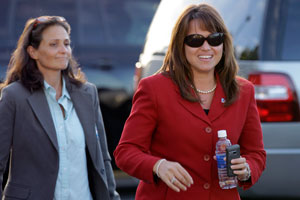 Imagine the family dinners: two sisters, one running for Senate as an anti-gay Christian conservative, the other an L.A.-based actor/director/spiritual healer who describes herself as living with a girlfriend.

Two days after tea partier Christine O’Donnell won the GOP Senate primary election in Delaware, The Daily Beast published a story that lit up the Internets: Wade Richards, a former employee of O’Donnell’s Christian right organization, The Savior’s Alliance for Lifting the Truth, was saying that O’Donnell’s sister was openly a lesbian and in a long-term same-sex relationship in Los Angeles. (Richards noted that he hooked up with the SALT as a supposedly ex-gay man but eventually came out of the ex-gay closet—and says O’Donnell “totally turned her back on me.”)

As a Christian right activist, O’Donnell has decried homosexuality, condemning the sexual orientation as a “perversion.” SALT not only campaigned against masturbation; it crusaded against homosexuality and other “un-Christian” sexual behaviors. O’Donnell, according to The Daily Beast, would go on speaking tours to discuss “sexual purity and curing homosexuality. Along with other Christian groups, SALT protested when President Bill Clinton appointing a gay man to an ambassadorship, citing the nominee’s alleged “ties to the pedophile-rights movement.” O’Donnell also blasted the federal government for giving too much money to AIDS patients. And earlier in her career, she worked as a press secretary for the Concerned Women for America, which has long railed against “the homosexual agenda.” Yet according to Richards, she had an openly lesbian sister.

The Daily Beast story does not identify O’Donnell’s sister by name. But she has a sister named Jennie who lives in Los Angeles. And Jennie’s Facebook and LinkedIn pages depict a person who appears to be quite different than Christine—in essence, the polar opposite. Yet the two have recently appeared on the campaign trail together, with Jennie obviously supporting her sister’s Senate bid.

On her Facebook page, Jennie notes that she “live [sic] in west hollywood ca with my girlfriend and my dogs. just try to keep it simple and live!” She notes she is self-employed as a “spiritual psychologist, actor, meditation teacher.” She describes her political stance as “conservative liberal.” As for religious views, she says she is “into spirituality, not one religion, study all religions, take what i like, leave the rest.” Her long list of Facebook “likes” include “The word ‘Fuck,'” Christine O’Donnell for US Senate, the No H8 Campaign (which opposed a 2008 California ballot proposition to ban gay marriage), the Dalai Lama, and the National Center for Lesbian Rights.

This summer, Jennie O’Donnell directed a play at the Los Angeles Women’s Theatre Project, a feminist theater company. Entitled The Oblivion Series, the production included, according to a promotional flyer, “course [sic] language (oh my!) & partial nudity (oh behave!).” It was part of the Hollywood Fringe festival. But she also was assisting her sister, as she reported in a September 2 Facebook message:

alot of fun; but also getting up early, and to bed late going to all the campaign eventsand staying up working late….. 6 am today, at 4 am tomorrow… but it’s really a very neat experience…

On LinkedIn, Jennie O’Donnell notes that she is a “doctor of metaphysical universe studies,” a certified hypnotist, an ordained minister, and a massage therapist. She describes her works in the “healing arts” at length:

I have been involved in the healing arts since 1987. At first my involvement was as a quest to work on my own issues and find deeper meaning and purpose in my own life. As my life healed, I found that sharing what I had learned could help others, as well as myself
I believe every life issue has its roots in and begins healing in our souls. In this work, we assess ones needs and what they,want, or need to accomplish in a safe, gentle, productive atmosphere.

In this work a client and I would take a soul centered, body-mind therapeutic approach, blended with aspects of traditional counseling to help heal from and deal with the issues in their life at core levels. As a result change does happen.

I have studied and practiced many therapeutic methods, as well as many different spiritual practices, such as; The Eastern Philosophies of Buddhism, Taoism, Sidha yoga with Brahma khumaris and other yoga practices for self realization. Western philosophies of Christianity, Science of mind, Course in miracles, Catholicism, Native American Spiritualities, Judaism, Muslim, Sufi, Ancient Alchemy of the Emerald Tablet, Metaphysics, Wicca, Pagan and many other world spiritualities.

The O’Donnell Senate campaign did not respond to requests for comment. On Wednesday, Jennie posted this message on Facebook:

to all my friends and family..thank you for your great wishes.. for the wisdom to see through the insane lies that were being tossed around, and still will be, i supose. i’m sure they will make up new ones; but thank you for your love, support prayers, good humor… and support of my sister,no matter what lies were made up about her…oh.. p.s. haave you heard the latest? she’s homophobic… gotta laugh

Christine O’Donnell has been a poster girl for Christian fundamentalism and social conservatism; Jennie O’Donnell has been something of a hippie-artist. One rails against homosexuality; the other fancies gay marriage. One decries masturbation and any sexual practices outside of marriage; the other supports lesbian rights. Still, Jennie has loyally been helping her anti-gay sister Christine become one of nation’s top lawmakers. To some that might seem curious. But her Facebook page has what might be the explanation. Under “bio,” Jennie O’Donnell writes, “love my family very much. i am nuts about them. totally in love with them… i am glad we chose each other, and i thank god for that…….oh enough about me… tell me about you?”