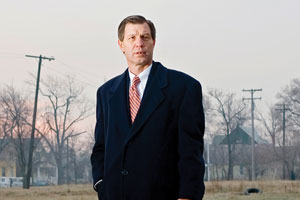 For nine years, Midnight Golf has been providing college prep—and putting tips—to high school seniors from Detroit’s neediest families. In a city where about 35 percent of freshmen go on to graduate, the program, founded by a social worker and single mom in 2001, has sent more than 350 kids to college. During two three-hour sessions every week (PDF), students receive college counseling and hone their resumé-writing and public-speaking skills—and then they head to the golf course and practice their game with PGA players. Paging Tiger Woods: Redemption awaits!

A local multimillionaire wants to turn Detroit’s vacant lots into the world’s largest urban farm. John Hantz, the founder of a successful financial-services company and one of the few wealthy men living in Detroit proper, has pledged to spend roughly a third of his $100 million fortune growing a verdant empire—10,000 acres of berries, apples, tomatoes, lettuce, and Christmas trees. He’s currently lobbying for tax incentives on the lots—he argues that the now-tax-delinquent land will put more cash in the city’s coffers if assessed as farmland. Hantz insists that the farms will employ some 250 Detroiters and become a family destination, with produce stands, pick-your-own fields, and picnic spots galore.

But critics are not so sure: Some have called Hantz’s venture a land grab. Others fear that a for-profit superfarm will pull business from the smaller farms that are already thriving in the city, including Earthworks, a nonprofit organic operation on 1.5 acres of rented vacant lots, and the Detroit Black Community Food Security Network, which runs farms and a produce co-op in neighborhoods where fresh fruits and veggies are hard to come by.

At the center of the city’s burgeoning bike scene (fewer people equals fewer cars on the streets, and the city is pancake-flat) is a two-year-old nonprofit bike shop called the Hub of Detroit, where customers can pick out old bikes in the back room, then pay the staff to refurbish them. Profits support the Back Alley Bikes training program, which for a decade has been teaching youth how to build and fix their own rides.

Just 18 months ago, Spaulding Court, a 20-unit faux Gothic townhouse complex in Detroit’s North Corktown neighborhood, was a near-vacant and weed-infested eyesore. But in January, 25-year-old structural engineer Jon Koller founded a nonprofit called the Friends of Spaulding Court and bought the classic limestone structure for $1,000. With $60,000 in loans, some rounded up via the crowd-funding sites Kickstarter and Loveland, the group stripped the junkie-ravaged apartments, installed plumbing, and planted a garden. Today, with three occupied units and counting, Spaulding Court is the centerpiece of an increasingly lively block—an organic farm, a food cart, and a park are all a stone’s throw away.

With the auto market stalling, some car manufacturers are switching to the clean-energy sector. Last September, an Irish solar-power company contracted with Detroit-based race-car manufacturer McLaren Performance Technologies to produce parts for solar dishes (think satellite dishes with panels). Meanwhile, Nextek Power Systems aims to make buildings more efficient by improving the conversion of AC electricity from the grid to the DC power that’s used to run some appliances. The company has helped corporations including Target and Frito-Lay to improve their energy efficiency, and is working with the Pentagon on charging stations for electric cars. And in the city’s Midtown neighborhood, a business incubator called TechTown nurtures new high-tech companies, many in the alternative-energy field. One of its tenants, founded by a couple of auto-industry vets, is Clean Emission Fluids, which makes machines to custom blend biofuels for gas stations and trucking companies.