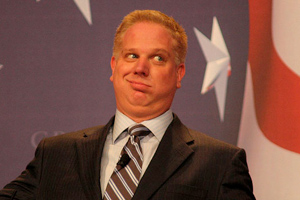 It’s starting to look like a big tea party rally planned for the National Mall on Saturday—the ninth anniversary of the September 11th attacks—could be a major bust. If so, a surprising culprit may be to blame for the flop: Glenn Beck, who essentially launched a movement and then bailed on it when it really counted.

Since late last year, activists affiliated with Beck’s 9.12 Project have been furiously promoting and fundraising for the event, dubbed the “March on DC.” Organizers initially made it sound as though millions of activists were prepared to descend on the Mall in an outpouring of anti-government outrage. Now, though, it seems like the event could draw fewer than 2,000 people.

What’s Beck’s role in the potential bust? Here’s the back story: In March 2009, the Fox News host called on his viewers to come together the way Americans did on September 12, the day after the planes hit the World Trade Center and Pentagon. He urged them to rally around his “nine principles and 12 values” (No. 2: “I believe in God and He is the center of my life”) and to launch their own local organizations devoted to the cause. After he set up a website to facilitate the movement, the overwhelming response crashed it almost immediately. Soon, thousands of 9.12 groups sprang up across the country.

These groups formed something of a parallel wing to the tea party movement, and they are often conflated as the same thing. But they aren’t. As one 9.12 activist once explained to me, while most 9.12ers are tea partiers, not all tea partiers are 9.12ers. The most significant differences between the two groups revolve around the role of religion and the focus on social issues (there are a lot of Mormons in the 9.12 ranks). Tea partiers tend to fall into a more libertarian camp, concerned with fiscal matters—lower taxes, smaller government—while the 9.12ers fret about the country’s moral fiber and revere Beck. Christine Drawdy, a Florida 9.12 Project activist involved in organizing the “March on DC,” explained to Politico in November that while Beck is “not the leader” of the 9.12 movement, “all he has to do is say something, and they’ll jump.”

Tea party purists, by contrast, pride themselves on being part of a “leaderless” organization. They tend to distrust higher authorities and aren’t always Beck fans. (It’s not unusual to hear tea partiers, in off-the-record rants, deride their 9.12 counterparts as Beck “cultists”). Tea party activists trace their movement’s origins not to Beck’s March 2009 proclamation, but to Rick Santelli’s now-infamous on-air rant the previous month. That’s when the CNBC commentator, broadcasting from the floor of the Chicago Mercantile Exchange, went on a tirade against a proposed federal plan to stop home foreclosures and suggested that there might be a “Chicago tea party.”

Last year, with plenty of encouragement from Beck, activists from both the 9.12 and tea party camps converged on DC on September 12 for a rally sponsored by FreedomWorks, the advocacy group headed by former GOP House Minority Leader Dick Armey. Much to everyone’s surprise, tens of thousands of conservatives showed up for a protest that was initially expected to draw only a thousand or so marchers. The event became a defining moment for the tea party movement—and 9/12 a hallowed date. But its success prompted some enterprising activists who weren’t among the original 9/12 march organizers to attempt something of an end run around Freedomworks with an eye toward doing a replay in 2010. The move was apparently instigated by Beck himself.

The Monday after last year’s march, Beck’s ex-sister-in-law, Yvonne Donnelly, who runs his National 9.12 Project website, dispatched Drawdy, a Florida events promoter, to the National Park Service to apply for march and rally permits for most of the National Mall; she sought permits not for September 12, a Sunday, but for Saturday, September 11. (Presumably for religious reasons, marching on 9/11 was preferable to marching on a Sunday.) Not long afterwards, Beck began promising to unveil his vaunted “plan” for restoring America. On his show and in public statements, Beck also suggested he was going to take a bigger role in leading the 9.12 movement.

In November, Patrick Jenkins, another 9.12er close to Beck, created a new nonprofit, Unite in Action, to raise money for the “March on DC” and a related “Liberty Xpo” at a Washington hotel. UIA promoted the march with online photos of last year’s 9/12 rally and blasted out promotional materials like one that read, “Last year over a million Americans descended on the nation’s capitol to rally for freedom and unite as patriots. This year we are doing it again!” Such messages gave the impression that UIA’s march would not only be another mega-rally, but one put on by the same organizers responsible for the 2009 event.

But if the 9.12ers thought that Beck was going to headline the 2010 protests, they were in for a surprise. The Fox News star apparently had other ideas. He decided to hold his own DC rally on August 28, the anniversary of Martin Luther King Jr.’s “I have a dream” speech. He supposedly directed his minions to hand details of the 9/11 march over to “the people.” Donnelly subsequently dropped out of most of the planning to work on Beck’s “Restoring Honor” event and asked other 9.12 activists to take the reins of the “March on DC,” according to a source close to the discussions. Darla Dawald, who runs the conservative social networking site ResistNet, told Politico last year that, while Beck had set the march in motion, “Glenn doesn’t want it to be about him—always about the people. He wanted the 9.12 Project people (grassroots) to be involved and step forward—not him.”

Beck’s decision to abandon the 9.12ers left them planning the complicated and expensive logistics of a march without a star, not to mention all of his staff. A purely volunteer effort, UIA’s “March on DC” has been plagued with problems from the moment the organizers tried to beat FreedomWorks to the Park Service to apply for their Mall permits. That’s because FreedomWorks and some associated tea party groups have been planning a reprise of last year’s big march on the tea partiers’ hallowed date: Sept. 12. The dueling marches have left tea partiers confused over which is the authentic successor to last year’s 9/12 extravaganza.

Some are even angry that resources are being channeled into rallies when they should be focused on November’s midterm elections. And, of course, tea partiers are a patriotic bunch. Quite a few of them were offended at the idea of staging a political rally on 9/11. The Tea Party Patriots, one of the nation’s largest tea party umbrella organizations, refused to participate and is throwing its organizing weight behind the FreedomWorks rally, as they did last year.

Then there’s the star-power deficit. FreedomWorks, with its old-line GOP ties and corporate funding, has a long lineup of conservative luminaries who will be on hand to whip up the crowd on Sunday, including media mogul Andrew Breitbart, Red State blogger Erick Erickson, Rep. Mike Pence (R-Ind.), and Virginia Attorney General Ken Cuccinelli. By contrast, UIA’s biggest draws are Stephen Baldwin, ex-GOP presidential candidate Alan Keyes, and a former American Idol participant.

Without Beck’s backing, UIA also ran up against a significant funding problem. Throwing a big shindig on the National Mall isn’t cheap. It requires Porta-Potties, first-aid stations, security, and other amenities. And the National Park Service won’t issue a rally permit without proof that an organizer can foot the bill. While UIA has been raising money for the march since last November, the group only officially secured permits in late July. Even then, there seemed to be some uncertainty about the march’s future. In early August, UIA sent out a fundraising plea seeking to raise $40,000 in two days to underwrite their events.

The real death knell for the March on DC, though, came from Beck’s “Restoring Honor” rally in August, which sucked the wind out of the “March on DC” and likely siphoned away many of its potential attendees. After all, if a 9.12er on a fixed income can only afford to make one trip to Washington, she’s much more likely to make the trek to see Beck than the president of Homemakers of America, another featured UIA speaker.

Last weekend, rumors flew that the march had actually been cancelled entirely due to a lack of funds to satisfy the Park Service. But Tuesday, an NPS spokeswoman told me the Park Service was modifying UIA’s permit to reflect an expected attendance of no more than 2,000 people—a fraction of the throng who rallied last year on September 12, or who attended Beck’s “Restoring Honor” confab.

If many of Beck’s followers opt to skip the “March on DC,” they can always catch the rally the same way they see Beck—on TV. Unite in Action has arranged for people to view the march live via satellite, for only $19.50 a pop.