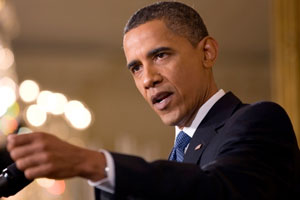 It wasn’t until the end of President Barack Obama’s first full press conference in three months that a problem became clear.

In the last question of the hour-plus session in the East Room of the White House on Friday morning, Fox News correspondent Wendell Goler asked the president about the Islamic center being constructed near Ground Zero in lower Manhattan, requesting that Obama “weigh in” on the “wisdom” of establishing a “mosque” near the site of the 9/11 attack. (Goler balanced out the question with a reference to the would-be Koran-burning pastor.) Obama delivered a heartfelt, forceful, and extensive reply. He noted that a bedrock principle of the nation is that all men and women “can practice religion freely.” If you can build a church, a synagogue, a Hindu temple on a site, he said, then you should be able to build a mosque. “We’re not at war with Islam,” he proclaimed. Referring to US soldiers, he said, with his voice rising, “I’ve got Muslims fighting in the uniform of the armed services of the United States. They’re putting their lives on the line for us…They are Americans!” His point: Should they be denied the freedom to practice their religion?

There was no equivocation. Weeks ago, when Obama first addressed this subject, he did seem to send a mixed message: that the developers of the Cordoba House project had the right to build it, not saying whether they should or shouldn’t. But while he didn’t explicitly endorse this project at the press conference, Obama took an unambiguous stand against the opponents of the Cordoba House. One National Review blogger called Obama’s response “the best answer I’ve heard from a mosque defender” (but he still remained unpersuaded). As Obama defended a position that, according to the polls, is unpopular with most Americans, he was at his best and most passionate.

But here’s the rub. Obama wasn’t nearly as passionate when discussing the No. 1 issue: the economy.

Questions about the economy dominated the Q&A. Obama presented a clear case. He noted that past policies had left the nation “weaker and our middle class struggling” and culminated in the financial collapse that nearly toppled the whole economy. He asserted that special interests had dominated Washington. He repeated his administration’s mantra: Our actions created or saved 3 million jobs, and we need to—and will—do more.

Obama slammed the Republicans for blocking legislation that would provide small businesses with billions of dollars in loans and for holding middle-class tax cuts hostage by insisting George W. Bush’s temporary tax cuts for the wealthy be extended (at a cost of $700 billion over ten years). “Why would we borrow money…and help people who don’t need the help?” he asked. He insisted that “everything we do” is “to stimulate growth and jobs,” adding that Republicans were not interested in this. He praised Elizabeth Warren as a possible head of the new Bureau of Consumer Financial Protection (without committing to appoint her). He forcefully defended the health care reform legislation, noting that this month several of its most popular consumer protections are kicking in (provisions allowing children to remain on a parent’s plan until the age of 26 and preventing insurance companies from denying coverage to children with preexisting conditions or arbitrarily dropping coverage for consumers who become ill). Over and over, Obama talked about doing what was necessary to assist the middle class.

He acknowledged that Americans still had cause to worry or to be angry: “Even after all the progress we’ve made, we’re not there yet, and that means people are frustrated, people are angry. It’s understandable that people are asking, ‘What have you done?'” He highlighted his new economic proposals: expanded tax breaks for businesses and an infrastructure fund. He served up a choice: Stick with him and the Democrats whose policies have moved the economy in the right direction, or go with the Republicans whose policies created the hole.

It was a fine presentation. Obama hit the obvious points with precision. He seemed to be cruising. In his zone. Then came that final query about the Islamic center—and Obama really stepped it up. He was emotional. It was evident he truly cared about this issue of religious freedom. He was speaking from both the heart and the mind. Yet his reaction raised a question: Why hadn’t he been as passionate when talking about the middle class and the economy?

It’s not that Obama was passive or disinterested earlier on. (Remember when President George H.W. Bush looked at his watch during a debate with candidate Bill Clinton?) But he kicked into a higher gear for the “mosque” question. For those paying attention to Obama’s emotional content, this reply overshadowed his remarks about the economy.

This press conference—which did not produce much news—showed that no-drama Obama is quite capable of expressing fervor and conveying a deeply-held concern. But he chose to do so when stating a position that’s not in sync with popular opinion. That may be to his credit. But if he wants to keep Republicans from harming the middle class and hindering his presidency (further), he ought to apply this sort of passion when he addresses joblessness and the trials of the middle class—and when he blasts GOPers for their just-say-no obstructionism. Without taking a poll, it’s a good guess that most voters would rather see the president get worked up about fixing the economy than defending the Islamic center.