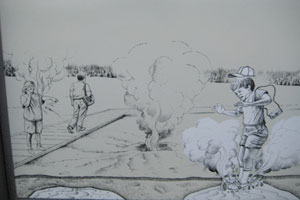 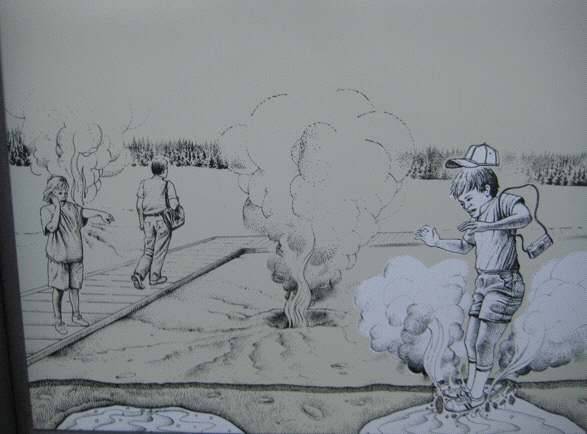 Someone Walked: The National Park Service doesn’t mess around when it comes to terrifying signage. Meanwhile, why does the one adult in this scene seem totally unfazed by the screams of these poor children? (Photo: Tim Murphy).Yellowstone National Park, Wyoming—Back on the planet Earth where I was raised, I’d never given much credence to the notion that the Yellowstone Supervolcano was part of a New World Order plot to exterminate two-thirds of the world’s population, bring about the Messiah, and restore large swaths of the continent to their original wilderness state. Then I discovered the Internet:

“The Illuminati may be planning to use the destructive nature of the Yellowstone Super Volcano as their major tool to accomplish their coveted ‘Re-wilding’ project.”

I guess Lady Gaga was just a decoy. Fortunately, there’s a whole community of independent Internet researchers who have committed themselves to constant vigilance of all things supervolcano—they monitor seismographic charts, earthquake patterns in the shape of a “Y” (Yellowstone has a calling card, apparently) in the western part of the continent, and the National Park Service’s Old Faithful webcam (which you can, and absolutely should, do as well). Rest assured that, should things start to get hairy, you’ll be able to plan accordingly and move somewhere remote like Montan—oh. Oh. 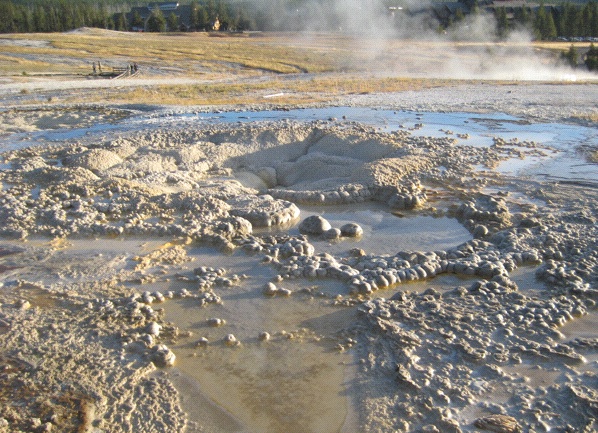 The Illuminati will stop at nothing (Photo: Tim Murphy).I should also note that the Yellowstone Supervolcano kind of underscores the logistical problems of joining a survivalist community. You’ve finally put the finishing touches on your bomb shelter, moved as far away from any desirable terrorist targets as possible, stocked up on ammo, canned enough vegetables (this is a survivalist thing, right?) to last until the big war finally winds down and things get a little less hairy, and put your combat boots up on the desk to thumb through Left Behind, and then—boom!—lava. How do you even plan for that?

In all seriousness, though, the US Geological Survey, which I guess should know, insists that, contrary to independent Internet researchers, there’s nothing to worry about; most likely, if/when Yellowstone erupts, the lava flows will be moving really slowly and you’ll be able to outrun it. Or even more likely, it’ll just cause an uptick in hydrothermal activity, so…stay on the walkways, I guess.