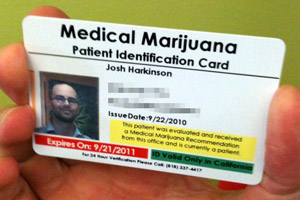 Recently, my wife and I had a contest. She’d ask her rheumatologist if he would write her a prescription for medical marijuana to treat her arthritis. I’d go online, find a doc, and see if I could get pot prescribed for a vague, undocumented medical problem. Then we’d see who’d be the first to join the ranks of California’s 500,000 medical marijuana users.

My wife (who asked me not to use her name to protect her privacy) had been thinking about pot because she’s running out of conventional medical options. Since she was diagnosed with severe arthritis earlier this year, she’s been unable to do everyday activities like walking around and keeping up with our one-year-old. She’s avoided drugs with serious potential side effects such as liver damage and cancer, instead trying to control the pain and swelling by dosing up on ibuprofen. Yet one of her doctors has suggested that all the ibuprofen may have triggered a complex chain reaction that ultimately made her condition worse. Without a substitute, she’d have to live with more pain.

Pot was also on my mind. I’d been examining how California’s $1.3 billion medical cannabis industry, born in 1996 when voters approved a measure legalizing the drug for medical use, has become a back-door for healthy people to hit the pipe. When I saw that medical marijuana boosters tout its ability to treat arthritis, I had an idea. I encouraged my wife to ask her physician about medical marijuana. At the same time, I’d venture into smoky world of pot docs and try to score my own license to inhale.

It didn’t take me long to find a pot-friendly MD. When I Googled “medical marijuana card,” the top hit was Marijuana Medicine Evaluation Centers, a chain with 10 California locations. According to its website, marijuana can treat 198 different maladies, including four types of arthritis, cancer, and AIDS, not to mention herpes, tobacco addiction, stuttering, and color blindness. Pot can even treat disparate conditions such as anorexia and obesity, fatigue and insomnia, diarrhea and constipation. And if your affliction isn’t on the list, never fear: While most states’ medical marijuana laws restrict its use to a narrow list of ailments, California’s gives doctors sole discretion over the decision whether their patients ought to smoke up.

Even so, I worried that I was too healthy to get a pot card. I could certainly claim occasional lower back pain, difficulty sleeping, or sore hands from typing (“writer’s cramp” is on the Marijuana Medicine Evaluation Centers’ list), yet I’ve never brought up any of those with a doctor. If you asked me, I’d probably say my most pressing medical concern is hair loss.

I needn’t have worried. Soon enough, I found Price-Less Evaluations, “the most trusted medical marijuana evaluation center in San Francisco,” whose site features a photo of a model in a lab coat and a coupon for a “420 special” (good for a $20 discount on April 20, 2011). Many California pot doctors will ask patients to bring in medical records that prove that their problems are legit (though they don’t always check them). But the woman who answered the Price-Less 24-hour info line assured me that despite my lack of documentation, “the doctor can just evaluate you, and he’ll decide whether you qualify or not.”

I called back two days later and immediately scheduled an appointment for that afternoon. On the same day, my wife tried to set up a meeting with her rheumatologist at Kaiser Permanente, our HMO. As I headed off to my 5 pm appointment, she was still waiting for a call back.

The Price-Less building is located along a strip of bars, discount shoe stores, and envios de dinero in San Francisco’s Mission District. Up a stairwell shedding wallpaper, I found a yellow waiting room with no chairs. Classical music played as a few not-visibly-ill young guys in hoodies milled about. The receptionist directed me through a door decorated with a cannabis-leaf poster that read, “Legalize It,” past an old “XRAY” sign and a few anatomy posters, and into a room whose carpet was littered with paint chips.

As I filled out a short medical questionnaire, a toddler with a pacifier strapped to his neck waddled in, stared at me, and waddled off. I checked off “chronic pain,” “joint pain,” and “insomnia,” then signed a two-page, 28-part legal document that promised that I’d “hold the physician, the principals, agents and employees, free and harmless of any liability from the use of cannabis.”

The receptionist led me back into a hallway, where I saw a stooped, white-haired man in a rumpled pullover—the doctor. “Come on in,” he mumbled. I stepped into an office and sat down at the edge of his desk. “So, can cannabis help you in some ways?” he asked, pen poised over a recommendation form. “I think so, yeah,” I replied, trying to sound confident.

“So how does it help you?” he asked as the ink dried. “Well,” I offered, “I have periodic pain from typing a lot, and in my lower back, and it could help me with that.” He smiled. “Good. It’s signed right there.” The entire conversation had taken less than 90 seconds.

On my way out, I paid the $70 evaluation fee in cash and forked over another $20 for a wallet-sized “patient identification card”—carte blanche to buy pot from one of California’s 1,000 medical marijuana dispensaries.

At home, I tried not to sound too excited when I broke my new status to my wife. “That’s ridiculous!” she exclaimed. Another day passed before she reached her rheumatologist, who claimed not to have authority over medical marijuana matters and referred her to a general practitioner. A receptionist said that the GP would get in touch.

That weekend, I headed to the International Cannabis and Hemp Expo. My medical marijuana card got me into a “patient consumption area” staffed by busty women in tight-fitting nurse outfits. A DJ was trying to recruit people to play “420 football”; participants advanced towards a goal line by taking bong hits. As the refrain of “We Gonna Get High” hit the speakers, an employee of a San-Jose-based pot dispensary wearing a nametag that said “Dr. Herb Smoker, MD” offered me a hit of Chocalope, his most popular variety.

Three days later, the Kaiser GP called back. My wife explained that ibuprofen might be contributing to her arthritis and asked if she could use marijuana as a substitute. “I’m not really willing to give you a letter for that,” the doctor said. My wife asked why. “I very rarely write letters for medical marijuana, and then it’s only for advanced cancer,” the doc explained. “I am not willing to write a letter for a relatively healthy 34-year-old for medical marijuana.”

So why were my wife’s doctors so quick to write off medical marijuana? “I think it’s progress to have Kaiser doctors recommending marijuana at all, given the chilled climate out there,” says Kris Hermes, a spokesman for Americans for Safe Access, medical marijuana advocacy group. In 1996, drug czar Barry McCaffrey threatened to prosecute physicians who recommended marijuana. Though a group of doctors successfully sued to block the prosecutions, Hermes says that “the effects of that attack on physicians remain to this day.”

A quick search turned up a half dozen studies documenting marijuana’s efficacy as an arthritis treatment in reputable, peer-reviewed journals such as the Proceedings of the National Academy of Sciences. Dr. Donald Abrams, a professor of clinical medicine at the University of California at San Francisco and a leading medical marijuana researcher, says this makes perfect sense. “Cannabinoids and some other components of the plant are anti-inflammatory, so it would not be a big wonder that cannabis is beneficial for patients with arthritis,” he told me. A white paper published by Americans for Safe Access concludes: “Research has shown that patients are able to reduce their use of potentially harmful Non-Steroidal Anti-Inflammatory Drugs (NSAIDs),” such as ibuprofen, “when using cannabis as an adjunct therapy.”

As our race to get a pot prescription showed, the irony is that medical pot is readily available to recreational users while it remains inaccessible for many truly sick people who might benefit from it. My wife has no plans to visit Price-Less Evaluations, and I suspect that many people like her wouldn’t consult the likes of Dr. Herb Smoker. Hermes concedes that a lot of legit patients “just don’t know how to approach this issue.”

And getting approved for medical marijuana isn’t necessarily a panacea. The heady strains of marijuana that pot dispensaries typically offer are designed to get people high, not healthy. One of the most potent anti-arthritic components of marijuana, cannabidiol, or CBD, has been largely bred out of most marijuana strains because it counteracts the psychoactive effects of THC. However, some more medically sophisticated pot dispensaries, such as Oakland’s Harborside Health Center, have started selling varieties with higher CBD levels.

My wife still has options. In November, Californians will vote on Proposition 19, a ballot measure that would legalize pot in the state. Whether or not it passes, little can stop her from taking advantage of my shiny new pot card. San Francisco allows medical marijuana patients like myself to name two “caregivers” to buy up for us in case we’re too sick to get to the dispensary. I think I’m feeling another bout of writer’s cramp coming on.

A condensed version of this story appears in the January/February 2011 issue of Mother Jones.