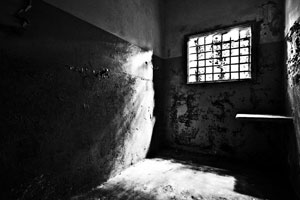 Last week, civil libertarians drew a sigh of relief when New York federal court judge Lewis Kaplan ruled that the government could not use its prime witness in the case of Gitmo detainee Ahmed Kalfan Ghailani because that witness had only been found through Ghailani’s torture. It will be a while before we learn the exact reasoning of Judge Kaplan, whose final decision is being reviewed by government security experts before publications. (I’ll file an update once I read the redacted opinion). But whatever the fine points of Kaplan’s legal reasoning, it was a landmark decision—and perhaps just as important was the fact that the government chose not to apeal.

But even as we embrace this movement forward in the case—the trial began Tuesday—there is reason for concern. In his brief decision, Kaplan took away even as he gave. On the heels of banning the torture-tainted testimony, he appeared to endorse the notion of indefinite detention:

“It is appropriate to emphasize that [Ghailani’s] status as an ‘enemy combatant’ probably would permit his detention as something akin to a prisoner of war until hostilities between the United States and al Qaeda and the Taliban end even if he were found not guilty in this case.”

Why did Kaplan raise indefinite detention—which the Obama administration insists is a real a possibility for alleged terrorists—in his memorandum? Was he trying to show that he is on board with popular sentiments about national security? Or was he trying to give some reassurance to the prosecution (as my colleague Joshua Dratel suggests) so that they would continue with the trial and refrain from filing an appeal?

In his last conversation in court with the prosecution about the witness, Kaplan asked the government what was so vitally important about this witness. And the prosecution answered that without the witness, they could not connect Ghailani, an alleged Al Qaeda member implicated in the 1998 Embassy bombings in Tanzania and Kenya, to the explosives used in the attacks. Perhaps Judge Kaplan registered their concern—the government’s case will be less strong, it appears. Nevertheless, the judge has been determined for months now to have the trial begin on time, as scheduled, this week.

Raising the possibility of indefinite detention even after an acquittal breaks novel legal ground—and it is cause for great concern. But there are two things to keep in mind. First, the trial is going to take place. In a world where even the basics of due process must not be taken for granted, I guess we should be grateful for that—and for the fact that torture-obtained evidence will, at least according to this precedent, not be allowed in our courts. As for preventive detention (a concept that seems to defy the same rule of law that finally got Ghailani into this courtroom) we’ll have to wait to have that discussion until the decision is upon us.