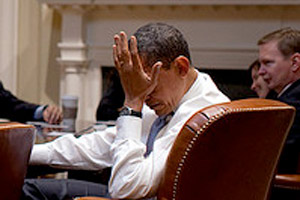 If the Republicans gain control of the House of Representatives in the coming congressional elections, Americans can expect to see subpoenas flying like pigeons around Washington next year. Rep. Darrell Issa, the California Republican likely to take over the House oversight committee, has pledged that if the GOPers win the House, he will double the size of his staff in order to mount multiple investigations of the Obama White House. But will these be real probes or trumped-up witch hunts? A taste of what’s to come can be found in the Republicans’ current effort to whip up an Obama scandal: GoolsbeeGate.

The issue: Did White House economic aide Austan Goolsbee nefariously gain access to the confidential tax records of Koch Industries, a megafirm privately owned by the billionaire Koch brothers, who have funded much anti-Obama political activity? The short answer: Probably not. But that hasn’t stopped the scandalmakers, while the White House response has provided them running room.

This controversy began with an August 27 press briefing, which featured an administration official speaking on background (meaning he could be quoted by position, not by name) to discuss a recent report on the US corporate tax system. That report noted businesses were increasingly eschewing corporate structures in favor of partnerships and other so-called “pass-through” entities to duck corporate income taxes. This official told reporters:

So in this country, we have partnerships, S corps, we have LLCs—we have a series of entities that do not pay corporate income tax. Some of which are really giant firms. You know, Koch Industries, I think, is one, is a multibillion dollar business, and so that creates a narrower base because we got literally something like 50 percent of the business income in the US is going to businesses that don’t pay any corporate income tax.

Aha! Republicans cried: The White House could only know about Koch Industries’ tax status because it rifled through confidential IRS records to gather dirt on its political foes. Mark Holden, Koch’s general counsel, complained about how the White House had obtained this information on the company. Rep. Devin Nunes (R-Calif.) issued a statement slamming the White House for possible “unlawful use of Internal Revenue Service documents.” Holden then told the conservative Weekly Standard that the administration official in question was Goolsbee. (I didn’t participate in that briefing, but it’s widely accepted within the press corps that Goolsbee made those comments.) The White House maintained that the information about Koch Industries had not come from IRS files but from testimony before the President’s Economic Recovery Advisory Board and the company’s own website:

This issue was raised repeatedly by outside experts that testified before the PERAB and Koch was cited to the PERAB as an example by outside commenters to the group. We assume it came up from publicly available information such as the Forbes magazine annual report listing Koch as one of the largest private companies in the nation or the fact that a high fraction of the largest companies within Koch Industries are listed on the Koch website as LLCs, LPs or other frequent pass-through entities. If this information is incorrect, we are happy to revise statements.

And Goolsbee did say, “I think,” when he had referred to Koch Industries—hardly evidence he was slyly exploiting ill-gotten information. But none of that stopped the Republicans. On September 23, Sen. Chuck Grassley (R-Iowa) and six other Senate GOPers sent IRS Inspector General Russell George a letter asking him to investigate “a very serious allegation that Administration employees may have improperly accessed and disclosed confidential taxpayer information.” And five days later, George wrote back to say he had “ordered the commencement of a review into the matters alleged.”

But here’s the rub—and it’s a big one: Goolsbee didn’t get it right. He erred when he described Koch Industries as a pass-through. Which would seem to indicate that he and his White House comrades did not swipe any confidential information out of IRS files. And the source for this key fact? Koch Industries.

On September 24, the Wall Street Journal reported, “Koch Industries has issued a statement saying that [the] company is organized as a corporation and pays corporate income taxes.” The Journal added, “it appears Republicans may be barking up the wrong tree here. The information from the White House official may not be publicly available because it is wrong—not because officials have been plundering the Internal Revenue Service files.” (Holden also told The Weekly Standard that Koch Industries is organized in such a fashion that it pays corporate taxes.) If Goolsbee, according to Koch Industries, had misstated Koch Industries tax status, then he certainly wasn’t working off top-secret IRS information.

At this point, the White House could have ended the non-scandal. It could have declared that Goolsbee had muffed it. Perhaps he had committed the mistake on his own. Perhaps he had picked up on a mistake already in the public record. (It’s possible that because Koch Industries topped a Forbes list of the United States’ largest private companies, Goolsbee had assumed this firm was avoiding corporate taxes.) Goolsbee could even have apologized to Koch Industries for having mischaracterized their tax status—though without access to Koch Industries tax filings, he couldn’t know for certain. (“Hey, sorry, I was apparently wrong to say that the parent company was a pass-through; I should have said some of its subsidiaries appear to be.”) What would there have been to investigate at this stage?

But the White House hasn’t taken that course. It’s denied wrongdoing, but it hasn’t fully explained how Goolsbee came to tag Koch Industries as a tax dodger. On Thursday morning, I asked White House Press Secretary Robert Gibbs if the administration could identify the basis for Goolsbee’s comment. (That Forbes list, say?) Gibbs repeated the previous White House response: Goolsbee hadn’t based his statement on any review of tax filings, and the administration will not use this example in the future. But why not disclose precisely how Goolsbee had come to (errantly) finger Koch Industries? Gibbs said he needed to get “better information on that.” Such a reply will only fuel the conspiracy-seekers.

The headline on the Wall Street Journal‘s story neatly summed up this affair: “Scandal or Incompetence?” The article clearly came down on the side of the latter. It seems that Goolsbee committed a slip-up, not a crime. If the White House had quickly conceded and explained the mistake, the Republicans wouldn’t be able to justify any investigation.

It may well be that the IRS IG dispenses with the matter quickly (and he’s bound to handle the investigation confidentially). Meanwhile, the GOPers and their conservative media allies will be able to yap that the Obama White House is being investigated—cue the ominous music—for possibly abusing confidential IRS information to slam a political foe. With the Republicans manufacturing a scandal and the White House inelegantly responding, this episode may be a preview of post-election Washington life.