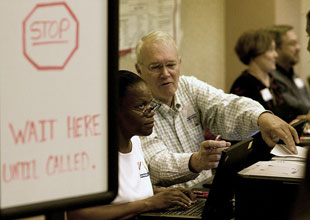 When Republicans decided to team up with the tea party to resurrect their crusade against voter fraud, voting rights advocates worried that the GOP would end up intimidating eligible voters. Though the election is still two weeks away, reports of voter intimidation have already begun to surface during the early voting that’s begun this week in many states. In the Houston area, the Harris County Attorney is investigating 14 complaints that early voters from predominantly minority areas were intimidated at the polls. Meanwhile, the Department of Justice is interviewing witnesses about the alleged voter intimidation, TPM Muckracker reports. According to the Houston Chronicle:

The complaints included poll watchers “hovering over” voters, “getting into election workers’ faces” and blocking or disrupting lines of voters waiting to cast their ballots…

Kevin Mauzy, chief deputy county clerk, said more poll watchers than usual showed up during the first day of early voting, and their numbers may have made some voters uneasy…Janie Reyes, who voted in Moody Park, said she witnessed poll watchers carrying on conversations with voters and clerks. “As I understand it, they’re not supposed to be talking,” she said.

Tensions around voter integrity are riding high in Harris County, where a nonprofit linked with a local tea party group, the King Street Patriots, accused voting rights organization Houston Votes of illegally registering 17,000 new voters. (Houston Votes admitted there was a small handful of incorrectly registered voters, but denies perpetrating massive fraud.) The most populated part of Texas, Harris County is also a key base of support for Democratic gubernatorial candidate Bill White, the former mayor of Houston who’s locked in a tight race against incumbent Rick Perry.

The Texas Democratic Party has suggested that the King Street Patriots are responsible for the overzealous poll watchers. The tea partiers deny that they’re organizing such a push. But other tea party groups in Texas and elsewhere are certainly moving ahead with efforts to recruit poll watchers and workers, hyping up fears that the phantom menace of ACORN, labor unions, and other Democratically allied groups will try to steal the election.

Meanwhile, elsewhere in Texas, the Dallas Tea Party claims that activists themselves are being discriminated against at the polls. One of the group’s coordinators, Katrina Pierson, says a tea partier in Garland, Texas was asked to remove her Gasden (Don’t Tread on Me) button before being allowed to vote, and that a similar incident happened to another voter wearing a Waco Tea Party t-shirt. Although campaign paraphenilia is prohibited in polling stations, the “Tea Party anything is non-partisan and does not represent a candidate,” says Pierson, adding that the group was investigating the claims further to see if legal action was warranted. (According to the Texas Secretary of State, tea party apparel is “included in the definition” of prohibited campaign paraphenilia, says Sarah Duncan, campaign administrator for the Dallas County Democratic Party. She adds that there have been “rumors” of voter intimidation in the area, but “nothing on the scale of the stuff in Houston.”)

Nevertheless, the allegations have riled up the Texas tea partiers about shenanigans at the polls. “Maybe we could have gotten in if we had worn Black Panther T-shirts and carried Billy clubs,” says Phillip Dennis, another Dallas Tea Party leader.