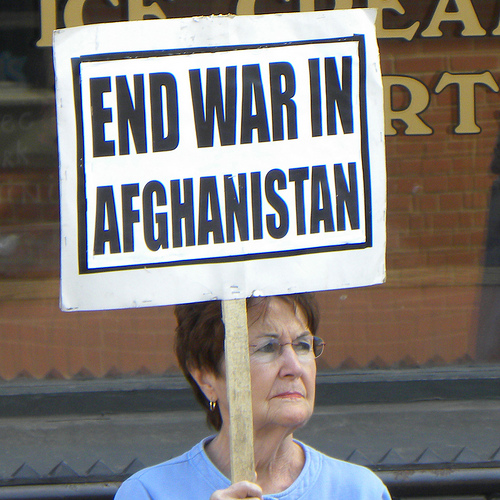 [Read more MoJo coverage of the Operation Enduring Freedom anniversary in “Happy Birthday, Afghan War!“: What milbloggers in the know are writing, and what it says about the state of the war today.]

What happened? Wasn’t Afghanistan the war (almost) everybody agreed was worthwhile? Didn’t candidate Barack Obama gauge the political winds correctly when he said, “When I am President, we will wage the war that has to be won…getting out of Iraq and on to the right battlefield in Afghanistan and Pakistan”?

Goodbye to all that. On Thursday, Operation Enduring Freedom (OEF) will enter its tenth year, and fair or not, US citizens see it much the same way they see Iraq: as an albatross around the nation’s collective neck. Nearly two-thirds of the public now oppose the Afghan campaign; in mid-October 2001, it was favored by a staggering 88 percent of Americans (PDF). Politicians and armchair pundits have cited a bevy of reasons for the war’s plummet in popularity—a decline that’s been going on so long, it looks inevitable to most Americans now. But I solicited the advice of two political scientists on different sides of the political spectrum who found reason to be surprised by the turn; their conclusions are similar, and they have big implications for the Obama presidency—and future US security.

Christopher Gelpi, a professor at Duke University, has been researching public opinion on wars for more than a decade. Along with colleagues Jason Reifler and Peter Feaver—a Republican who helped author President Bush’s revamped Iraq War strategy in 2005—the left-leaning Gelpi modified a Vietnam-era theory that higher casualties led to lower approval ratings of a campaign. It was more complex than that, they said: Americans would be willing to brook greater casualties in a war, if they perceived progress towards victory or withdrawal. “It is the combination of costs (in terms of casualties) and a lack of confidence in success that leads to the erosion of support,” he told me in an email Wednesday. In that light, he said, “I think it is somewhat surprising on its face that support for the war in Afghanistan has dropped so significantly since the initially overwhelming support.”

Daniel W. Drezner is a right-leaning professor of international relations at Boston’s Fletcher School Diplomacy (as well as a Foreign Policy blogger and author of the book Theories of International Politics and Zombies). He agrees that the Afghan War’s souring was surprising at first glance—both at home and over there. “One of the shocking things is how long the Afghans accepted US intervention,” he said. “It took a lot of time for this thing to go south.”

Time: Gelpi and Drezner agree with Obama’s campaign stump speech on this point. Unsurprisingly, the Afghanistan campaign was prolonged because the Bush administration chose to divert critical resources to Iraq. “Initially, the war in Afghanistan appeared to be very successful for the US and casualties were light. Thus support was very high,” Gelpi said. “As US policy makers turned their attention away from Afghanistan and toward Iraq, the Taliban began to regain strength—jeopardizing our initial success. The erosion of the situation in Afghanistan had little impact on support, however, because the war was not costly in terms of US casualties.”

Beyond the actual warfighting issues though, Drezner argues that the more divisive and violent invasion of Iraq had a drag effect on domestic attitudes toward the Afghanistan War. “Iraq sort of took that luster off of any kind of military operation,” he said. Ironically, Gelpi’s research shows the lost luster has had little to do with actual facts in Southwest Asia:

Again, no big surprises: Statistical research proves that right- and left-wing citizens tend to perceive the wars through a filter. What is chilling, though, is the effect this distate for the war will have on future politics, domestically and politically. Gelpi concluded:

This combination of effects puts Obama in a difficult position in terms of increasing public support for Afghanistan. According to the results in Gelpi/Feaver/Reifler, he should demonstrate progress in order to increase support. But according to my more recent results, Obama may find it difficult to persuade Democrats to update their views of Afghanistan because they are so prejudiced by Iraq. This leaves Obama relying on Republican support to continue the war in Afghanistan, and Republican support for anything Obama does is tenuous at best.

Of course, the left has other justifiable reasons to be weary of the Afghan occupation. The moral hazards involved in the US presence are considerable—from war crimes to torture of detainees—and we do well to remember that there’s been a vibrant anti-war movement in America since September 11, 2001. But if Gelpi and Drezner are right, disaffection with OEF is fundamentally rooted in a lack of knowledge, which could turn Americans full-on isolationist, rejecting even the most pressing of future interventions for human rights or security.

Drezner stops short of saying that. “I think what this has been a referendum on is statebuilding,” he told me. But maybe that’s a good thing, he added: “We’ve proven we’re not terribly good at it.”