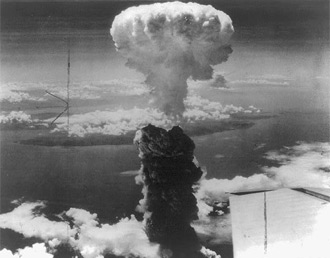 Last Saturday, an engineering malfunction at F. E. Warren Air Force base in Wyoming caused 50 US intercontinental ballistic missiles to go offline for 45 minutes. The ICBMs—one ninth of the US nuclear arsenal—were temporarily disconnected from the launch control centers at the base. Officials were quick to point out that it would still have been possible to launch the ICBMs from a command plane in a high alert scenario. But even if the reality of the failure wasn’t that bad, it’s implications for US nuclear policy might be.

Currently awaiting the Senate’s consent is the new START treaty, which would reduce US and Russian nuclear arsenals by 30 percent. Signed by Obama and Russian president Dmitry Medvedev last April, the treaty has received widespread backing: “The support for new START by our entire military leadership, our intelligence community, six former secretaries of state, five former secretaries of defense, three former national security advisers, and seven former commanders of U.S. Strategic Command is an extraordinary endorsement of why this treaty needs to be passed,” Secretary of State Hillary Clinton told reporters earlier this month. Ratifying the treaty would be a significant step toward nuclear disarmament. But a central argument for the new START treaty has been that because US nuclear stockpiles and launch systems are so well-maintained and reliable, the country could still pursue an effective deterrence strategy with fewer weapons. The mishap at Warren, along with several others in recent history, undermines this assumption.

In August 2006, the US mistakenly fulfilled an order from Taiwan for helicopter batteries with four classified nuclear-weapon fuses. A year later, six “hot” nuclear missiles were accidentally flown across the US from North Dakota to Louisiana. This missing nuclear weapons went undetected for 36 hours (“I have been in the nuclear business since 1966 and am not aware of any incident more disturbing,” a retired Air Force general commented to the Washington Post). The incidents led Defense Secretary Robert Gates to oust Air Force Secretary Michael Wynne in 2008. Gates called the oversights “a degradation of the authority, standards of excellence and technical competence within the nation’s ICBM force.”

According to John Noonan of the Weekly Standard, who originally broke the story on Twitter, an unnamed Senate staffer said that he thinks Saturday’s missile malfunction has killed the START treaty in the Senate. The staffer went on to say that the treaty might not even make it to the Senate floor before the midterm elections. With conservatives expected to gain seats in November, passage of the treaty, and progress toward nuclear disarmament, may be in jeopardy—leaving the country’s nuclear future all the more uncertain. On the one hand critics of the treaty have a point: These recent nuclear mistakes imply that our arsenal is more at risk of failure than it should be. But is the argument, then, that because our nuclear weapons are prone to malfunction and poor management, we need more of them? That seems like a strange piece of Cold War logic.