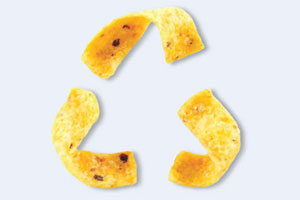 Several people have noted in response to my eco-chip bag diatribe that there were also concerns about whether Frito-Lay’s noisy SunChip bag actually lived up to its claims of compostability. I’ll explore that more below, but the point remains that the stated reason for bagging the bags wasn’t a concern about the whether they worked—it was purely in response to complaints about the sound (and the declining sales that resulted).

I still think this reflects more on Americans (or, at least, SunChip eaters) than it does on Frito-Lay. But let’s take a look at some of the complaints about whether the bag lived up to its eco-claims. Blogger Andrew Odom has been dogging this issue for a few months now. His repeated attempts to compost the bag (see trial one, two, and three) yielded no discernible results. The bag didn’t so much as appear thinner or worn down after weeks in the soil. He concluded that, without the aid of a composting facility or an expensive composting machine, the bags weren’t going to break down in 14 weeks as the company promised.

He writes about why this is a problem:

If Joe Smith eats a bag of SunChips and then discards the bag out the window thinking to himself, “Oh, it’s one of those tree-hugger bags. It’ll just disappear like the bag shows,” and the bag claim is bogus, then isn’t the compostable bag just another piece of trash? It is for at least the 14 weeks it sits idle on standard soil under standard conditions.

Odom thinks the Frito-Lay’s stated reason for ditching the bags was just a cover for these real problems with the claims about their biodegradability. I don’t have that much faith in corporate America’s concern about living up to green marketing. I’m pretty sure the complaints about the noise were what did the bags in—and that’s what inspired me to write yesterday’s rant about the American consumer.

Others have also raised concerns about just how eco-friendly this particular type of bioplastic actually is. There is of course a healthy debate about the sustainability of those products, but it’s hard to argue that they’re not at least a little bit better than the petroleum-derived plastic bags that most chips come in.

Now Frito-Lay says it’s going back to the drawing board on compostable bags. A company representative writes to the blog The Inspired Economist:

I’m glad to see the company is not shelving the idea of a compostable bag altogether. Maybe the next generation can solve the problems with the sacks—real and exaggerated.