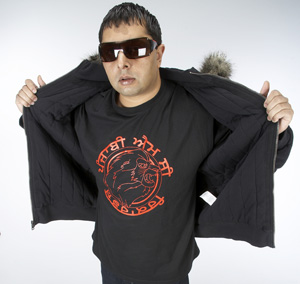 If you’ve ever been to an American club with a bunch of Desi guys, you won’t have to ask whether it’s Panjabi MC‘s “Mundian Tu Bach Ke” thundering through the speakers. Immediately, a circle forms. Everyone sends one arm up, finger pointing at the ceiling, one leg pointed toward the center—like children doing the hokey-pokey. Then everyone circles around hopping on one leg. This is the bhangra dance. It may seem like an act of cultural peacocking in the context of a Western pub scene, but it’s actually a propos, considering the British-Indian MC’s influences. Né Rajinder Singh Rai, he adopted his stage name after fans started calling him “the Indian emcee.” There’s no such language as “Indian,” he told them. His lyrics are Punjabi, the mother tongue of his family, which hails from the north Indian state of Punjab. The bhangra sound amalgamates his heritage with Western hip-hop, blending music and beats from both cultures into an undeniably exotic and danceable mix. But it was a guest appearance by Jay-Z in the abovementioned song from his 2003 album Beware that first got him noticed in the States. With his latest album, entitled The Raj, set to release on iTunes this week, we tracked down Mr. MC to talk about his favorite music, his artistic idols, and bhangra culture.

Mother Jones: How is your music received by Punjabi elders and your family back in India?

Panjabi MC: Some say that it’s an absolutely bloody disgrace. But then, it wouldn’t be very cool if they were all down with it, would it? On a more serious level, they are very proud that a Punjabi boy has been able to go to the big market and play some real Punjabi music to the world.

MJ: Beyond the music, what common ground do you see between Punjabi and black hip-hop communities?

PMC: As ethnic minorities in UK, we have a lot in common. I think of Punjabi music as the Indian black music and bhangra as the Indian hip-hop. Punjabi music is very popular because of its dance element and the image that it portrays. In India, the mainstream language is Hindi, with all of the Bollywood films and songs in Hindi. Punjabi is not so common, but is based on the same script.

MJ: Who would like to bring back from the dead for a jam session?

PMC: That would be my idol James Brown, ’cause I did always want to work with him. From India, it would be Chamkilla who was killed at a young age,  and was regarded by many as the best singer who ever lived.

PMC: Bhangra artist Malkit Singh’s Billo Rani. He has always been one of my favorite bhangra singers. This year he became the first to receive the Order of the British Empire from the Queen and his album is a classic. He is also working on a fresh new album with various producers for the first time. I’m looking forward to hearing that.

MJ: What about a release outside your genre?

PMC: Usher and will.i.am did it for me. One of the best collabos of the year. “OMG” is massive all over UK and India. I think will.i.am is the hottest producer on the planet right now.

MJ: Three records or singles you never get sick of listening to?

PMC: I could name 100. Monnie Riperton’s “Loving You Is Easy ‘Cause Your Beautiful” is one of my fave tracks. And “Cold Sweat,” James Brown’s classic, or any of his classics. One of my all time favorite Punjabi songs is “Sajana Ve Sajana” by Gurdas Maan, one of the greatest Punjabi singers around and ever.

MJ: Tell me about your upcoming album.

PMC: I’m very happy with it. It sounds like some of my older work, with a diverse range of artists on it from the USA and India. This one is labeled as “recorded in Great Britian” and is more of a reflection on myself and my personal sound. The mix is more hip-hop this time but, as always, it’s full of anthems.

MJ: Shuffle your iPod and name the first five tracks.

MJ: What’s the latest song, good or bad, that super-glued itself in your brain

PMC: So many melodies nowadays. Usher and will.i.am’s “OMG.” Once I hear it, I can’t stop. Also check out “Yes I Will” by Hunter.

PMC: “Like a Virgin” is a masterpiece, but don’t tell anyone I said that.

PMC: Could go back to Madonna, but I won’t. I’ve got my ’80s selection with all the anthems—like “Don’t Let It Get to Your Heart” and “I Believe in Miracles,” as well as Biggie and Dre—it’s got to be mainly West Coast. Classics is what I put on my holiday mixtape.

PMC: Public Enemy’s “Fear of a Black Planet” is my fave. Also Stevie Wonder’s “Happy Birthday.” Or Pink Floyd’s “Another Brick in the Wall.” These were songs that had a very commercial sound but deep meaning.