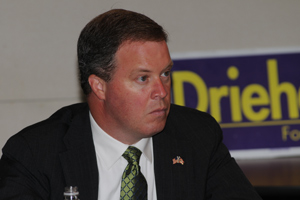 Pro-life Democrats, a disappearing breed these days (more on that here), continue to face political attack by a most unlikely force: fellow pro-lifers. In “Mommy, What’s a Pro-Life Democrat?” a new Mother Jones article out today, Nick Baumann examines how anti-abortion politicians who decided to vote for Obama’s health care bill, like Steven Driehaus (D-Ohio), Kathy Dahlkemper (D-Penn.), and, most famously, Bart Stupak (D-Mich.), have become punching bags for pro-life groups that are still arguing that the bill provides federal dollars for abortions.

One group, the Susan B. Anthony List, pledged $1 million dollars to try to take down Dem “traitors” to the pro-life cause. Its strategy included a plan to paint billboards across Ohio with the message: “Shame on Steve Driehaus! Driehaus voted FOR taxpayer-funded abortion.” When Driehaus caught wind of this attack a few weeks ago, he filed a complaint with the state election’s commission, arguing that the billboard’s message was false and violated one of the state’s campaign laws. The elections commission sided with Driehaus, and the billboards never went up.

The Susan B. Anthony (SBA) List countered by filing a lawsuit in federal court on Monday, arguing that the code that deemed the message on their billboard “a false statement” should be thrown out. The ACLU of Ohio agrees with the SBA List on this one, claiming in the amicus brief it filed on Wednesday that the Ohio code: “is vague and overbroad,” and will have “the effect of chilling the Susan B. Anthony List’s right to free speech.” But when does free speech become libelous?

Even if you think the SBA List should be allowed to keep their billboards, their motives in singling out pro-life representatives still seem fishy. Wouldn’t an organization bent on “advancing, mobilizing, and representing pro-life women” want a pro-life candidate to succeed? Driehaus contends that SBA List’s reasons for attacking him are “purely political,” and even some other pro-lifers agree. “We are disappointed in those who would mischaracterize the pro-life Democrats vote for political gain,” says Kristen Day of Democrats for Life of America. “Lying about the funding for abortion to defeat pro-life democrats may help with Republican gains, but it will weaken and hurt the pro-life movement in the long term.”